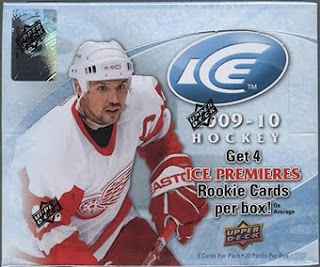 Each and every year (up till now) I have always tried to pick up at least one box of SP, SPx, and UD Ice.  This year was no different.  I stopped in to my LCS the other day and what do I see on the shelf but 4 shiny new boxes of 2009-10 Upper Deck Ice.  Now, I will admit, I haven't read or seen much about these yet this year but they have become a staple of my collection since returning to the hobby full time a few years ago.  Could I have paid less for this?  Yes.  But what would the fun be in that.

I can't say that I have ever been blessed by the extreme short prints or the highly sought after rookies in any of these boxes I have bought.  In fact, except for a year or two of actually pulling the base set in one box, I really hadn't had much to cheer about.  Don't get me wrong, I do like the card design.  Last years and this years both offer a raised textured feel that is like rink ice after a full period of hard nosed hockey.  I also like the Ice Premieres Rookie cards and their acetate surface as well as 4 tiered serial numbering.  The GU swatch and patch cards have always been traditionally larger than the standard releases as well.


So let's see what we should find in here:


As I mentioned, the rookie cards are tiered in four serial numbered categories.  Tier 1 is out of 99 and those fall about 1 per case.  Tier 2 is numbered out of 499.  Tier 3 is out of 999.  Tier 4 is out of 1999.  The Glacial Graphs and Rinkside Signings are always nice looking and are usually on-card which is great.  These fall about 1 per case.  There are also Frozen Foursomes which feature, yes, you guess it, four swatches of players.  These are numbered out of 5.

There are various other inserts and auto/swatch parallels featuring some of this years rookie class and stars of yesterday and today.  So without further adieu, I give you my box break. 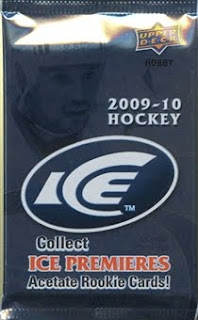 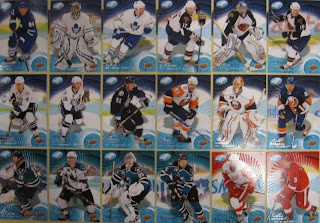 As you can probably tell, I stole this shot from the Bay because I was too lazy to scan any of the base cards.  They are very colorful and have patterns that match the uniforms of each player.  They also have that traditional Ice textured pattern as I mentioned earlier.  I ended up with no doubles and 6 cards shy of a 100 card base set.  Not bad for one box but a 6 card pack instead of 5 could have prevented that.

The see-thru Ice Premieres Acetate cards fell like this... 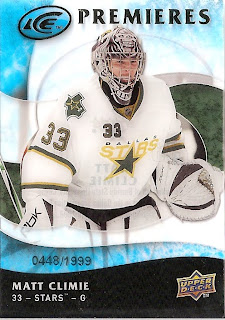 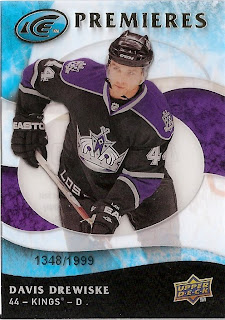 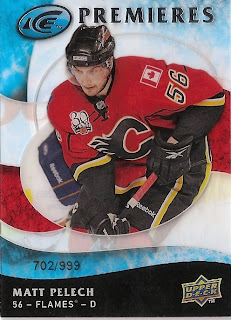 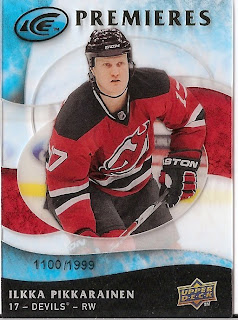 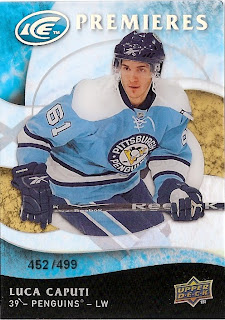 Luca Caputi 462/499 Tier 2
At 4 per box, I pulled an extra one.  That explains the 102 cards, well at least one of them anyway.  I was happy about the Caputi but then I remembered that awesome trade that sent him to Toronto for Ponikarovsky (hind-sight is always 20/20).  It is a nice card nonetheless and will fit right into my Penguin collection.

The Memorabilia cards were: 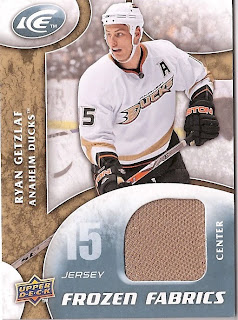 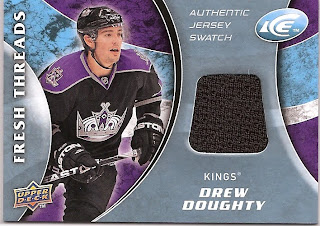 Drew Doughty Fresh Threads
Not a bad selection for the 2 GU cards.  It could have been much, much worse based on the checklist.  I was glad the Getzlaf was not a white swatch.  I already have one of his with a white jersey.  It would have been nice to get a purple swatch on the Doughty instead of black, though.

And last but not least, the 1 signature card per box that I pulled.  I was saving the best for last because I really have nothing to say about this card.  I checked the list of signature cards available in the set and I had some high hopes for what could have come out of here.  Instead...I end up with this abortion of a card: 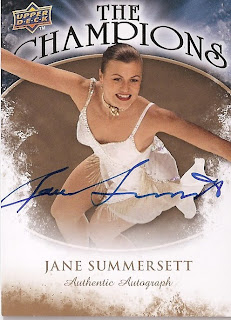 I never laughed so hard about pulling a card in my entire life.  Everyone in the shop was shocked that this was even included in there since most people assumed these were only in Series II.  The shop owner was kind of upset too because obviously pulling something good in his shop leads to repeat buys.  The other hockey guy that was in there at the time backed off one of the other boxes after he saw this.   I just can't believe Upper Deck decided to throw these throughout their entire line of products.  And then, they have the audacity to count them as the projected hits.  I'm sorry to all the figure skating fans out there but this is completely uncalled for.  Good thing I have a sense of humor.

So I am about 90% sure that this will be the last box of Ice I ever purchase.  Ever.  EVER!

If anyone has any of the base cards I need, hit me up.  They are listed on my set needs page.
This Post Brought To You By TheRealDFG at 9:00 AM

Email ThisBlogThis!Share to TwitterShare to FacebookShare to Pinterest
Labels: 2009-10 upper deck ice, Box break, one of my worst breaks ever