Okay, so as I go into my LCS one fine day, I notice the Between the Pipes on the shelf and had to have it.  I love the ITG releases and this was the next one that I had yet to bust.  But where were the boxes?
The day before, another hockey collector bought two boxes and the last one was opened to sell packs.  I was mortified.  How could they not save one for me?  Was I not worthy?  Actually I hadn't been in to the shop in almost a month so I didn't expect there to be much.  So upon checking the box, I realized there were 11 of the 18 packs left so I snatched them up.
I am not going to do a traditional review here because it's been done a ton for this set.  You can check out some other reviews and product images over here...
or here...

Since I didn't open a full box and only had 11 packs, I wasn't sure that I would pull any of the potential 8 hits that could have been in the box.  So after sitting down at the "trading table" in the shop, I began my busting journey.  For the sake of drooling over all of what I pulled, let me just show the two that I was quite happy with.

Three packs in and out popped this: 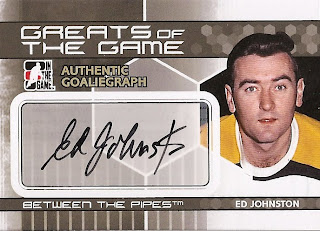 2009-10 ITG Between The Pipes Greats of the Game Goaliegraph Ed Johnston
This is definitely a keeper.  I almost jumped out of my chair when I saw this one.  I know it's a Bruins card but Ed Johnston is part of the architectural team that helped build the Penguins franchise.  He was the GM when Mario Lemieux was drafted in the first round back in 1984.  He is also one of the reasons the Pens were able to get Ron Francis and Ulf Samuellson although he was on the other side of the fence as a GM for the Whalers (he also gets blamed for them moving to Carolina but that's another story).  Ed has been with the Pens off and on since 1983, 24 years in fact.  Although he wasn't with the teams for their cup years in 91 and 92, he finally had his name put on the cup in 2009 as he is the Senior Advisor for Hockey Operations.
Two packs later, we get this: 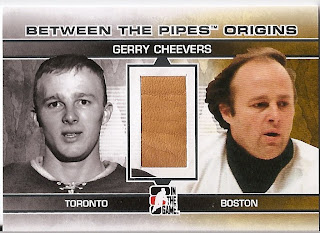 2009-10 ITG Between The Pipes Origins Gerry Cheevers Goalie Pad
This is the first memorabilia card that I have ever pulled that wasn't a jersey or patch.  This is a piece of the leg blocker pad (no, I don't know which leg).  I do have one stick card of Bill Guerin but I purchased that and didn't pull it from a pack.  Of course, I was excited to see this.  The card looks amazing in my opinion.  The scan doesn't do it justice (that is so cliche'd but true).  The design is so simple yet very impactful, using the grey and yellow hues on the background tie the before and after shots together nicely.  I have to say that I could have pulled a better card for my PC but this one is still sweet.  I haven't decided if it is going to have a permanent home in my collection yet or not so if anyone might be interested and willing to trade for something similar that would fit better in my Pittsburgh collection, I'm all ears.
Also, I plan on trying to put at least the base set of this together so if you may have doubles or ones that you don't need, I'm listening.
This Post Brought To You By TheRealDFG at 9:00 AM