Once I Read This I Couldn't Believe It

I saw this on the Yahoo new feed and just couldn't believe that it was true. I check the bay for ended auctions and low and behold...it is!!

Everyday folk discovering colossally valuable collectors' items amid everyday junk has been the lifeblood of antiques shows for years, but it's not every day you see a real-life gold-in-the-attic tale play out on eBay. 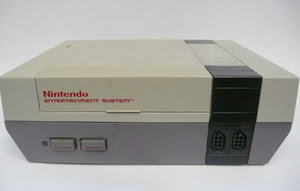 Last week, North Carolina eBay user lace_thongs35 thought she was putting up an everyday, 80s-era Nintendo Entertainment System (together with five games) up on the popular auction site. But less than an hour after the first bid, the price was over $6,000 -- and on Wednesday, when the auction closed, the final selling price topped $13,000.

Why? Not the console itself, but one of the games bundled with it -- a deeply obscure 1987 release called Stadium Events, a highly sought-after collectors' item. But it wasn't even the game itself that was worth the bulk of the money -- it was the original cardboard box, which collectors value at a breathtaking $10,000. Fewer than 10 complete copies of the game are thought to exist, and retro gaming aficionados consider it one of the hardest-to-find NES games ever made.

The sad part is, I did let my Mom throw out my old Nintendo and all the games. I didn't have quite that many (probably only a dozen or so) but the fact remains, what if?
This Post Brought To You By dogfacedgremlin at 8:59 AM