This was a great weekend for sports (IMO)

That is how people abbreviate "In My Opinion", isn't it? I am a noob when it comes to all the abbreviation etiquette in the blogosphere. At any rate, like I said, it was a great weekend for sports. 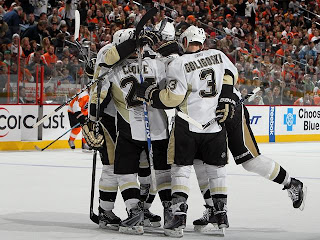 First off, the Pens won a heck of a game against the hated Flyers, 2-1. The first period alone had 30 minutes of penalties. Fleury was out yet again with his broken finger but despite a shaky start, Brent Johnson was pretty good in net. I will say this, the Pens got lucky with Gagne's high stick that cost the Flyers a goal and the fact that Timonen flipped the puck over the glass to give the Pens a power play at the end. Otherwise, it would have been a different story. The best highlight of the game was the goal by Gonchar that went through the legs of not one, not two, but three Flyer defenders. It was like he was playing croquet, only with ugly bright orange colored wickets. That game pulled the Pens to 10 points ahead of the Flyers and 3 back of the Bruins for the 3rd seed in the East. Go Pens!! 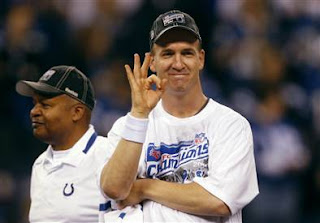 Second on the agenda...the Colts beat the Jets for a trip to the Super Bowl. My ambivalence and frightfully uncharacterizable feelings toward the Colts and their organization is equally matched by my disdain and hatred for all things New York...including the J-E-T-S (Just End The Season). I was on Cloud 9 after the game ended and Peyton began packing for another trip to Miami. Within moments of the closing seconds, the phone was dialing my sister-in-law, who is a huge Jets fan, to toast her teams gallant effort. Actually, I had my 6 year old sing "Na, Na, Na, Na, Hey, Hey, Hey, Goodbye" into the phone like a petulant child. I wonder if she was sobbing uncontrollably into her Wayne Chrebet jersey? If you are reading this and don't have kids, I would suggest getting some. They are wonderful tools for doing stuff you don't want to actually do yourself. 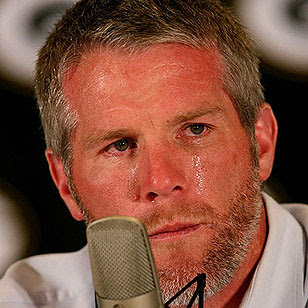 Finally, to cap the weekend off in superb fashion, The Greatest American Hero (...believe it or not...) was vanquished in his attempt to shove himself down the country's throat for one more week. Brett Favre and his "clandestined" season was put to an end by some heavily mistake ridden gameplay and the luck of a coin flip. I am not a Viking hater, nor am I a Saints bandwagon jumper. I am, however, not too keen on Mr. Favre (or as my 2 year old says Brett Fart) and his lack of respect for tradition and selfishness for the game of football. But that is neither here nor there and should be left for a conversation at a later date. 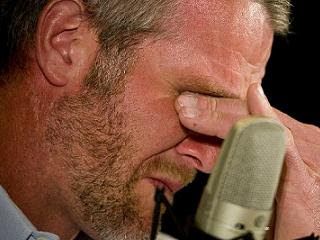 After the game, of course, the speculation began once again on whether he will or won't retire for the umpteenth time. The players, according to everyone's favorite football gossip queen Jay Glazer, seem to think he is done. What does that mean? If you ask me, it means that if there is a team on the cusp of making a run but lacks a solid QB and leader, sign him up. Why not? Let him be the rent-a-player that he seems to want to be. Just keep him off my TV. While your at it, keep his wife and family off my TV, too. Also, mandate that the announcers, analysts, and color commentators not speak his name for at least the next six months.
So there we have it. The Colts and Saints in the Super Bowl. The first time that I can remember (at least in a loooonnnnnggg time) we have both #1's against each other. It should make for some entertaining football.
Sidenote: Why is all the Super Bowl advertising promotion focused on The Who playing during half time and not the game itself? You would think the ads would be spouting "Feb. 7th, the Super Bowl" not "February 7th, The Super Bowl Halftime Show featuring The Who". I don't get it. Bring back the Bud Bowl.
This Post Brought To You By dogfacedgremlin at 12:21 PM