So far, so good

As of today, I have pretty much stuck to most of my resolutions. I have yet to overload on retail boxes and my collection organizing is coming along swimmingly. The addition of the baseball cards did put a snag into the consolidation plans but found cards are as good as free cards and I love me some free cards.

I finally received my first card for my Bill Guerin player collection. I had won this one at auction back in December for a whopping $.35 (American). After two weeks of not receiving the card, I happened to check the seller and discovered that he was not in the US. He wasn't even on this continent in fact. He was from the UK and had sent everything from his closing auctions out the week of Christmas. I didn't know how long mail took from overseas and neither did he. Well, the answer, my friends, is 29 days. Here it is... 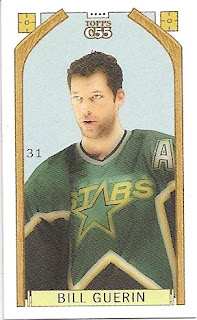 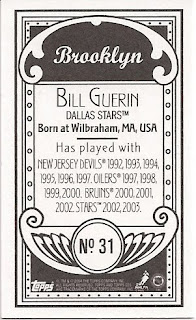 This is the first C-55 card I think I have in my entire collection. I was out of the hobby at that point, or at least on hiatus. I didn't collect anything from 2000 until 2004. This was one set that must have flew under the radar. It is a retro set modeled almost exactly after the 1911-12 C-55 Set. It is believed by most people in the hobby that Imperial Tobacco issued this set with their tobacco products, although no one actually knows for sure. Topps did a pretty good job of recreating these. Unfortunately though, they fail when it comes to production. In perusing the checklist for others in this set, I found 11 different variations of Guerin cards in this set, 8 of which are mini versions with back variations. Still, I like these cards and will probably try to find some more if I can.

So there we have it. My first player collection PC card of the year.
This Post Brought To You By dogfacedgremlin at 9:42 PM