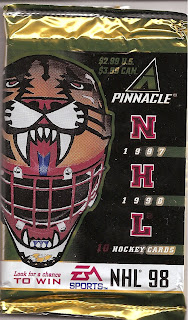 Yeah, that's right people. 1997-98 Pinnacle Hockey!! I figured for the first box break of the year I would travel back in time to last decade when all thing were pure and clean. We used to have these things called cars back then. They had four wheels and took us from place to place on these things called roads. We even had to fill them with this fuel substance called gasoline...what's that you say? We still have those? Oh, but I thought this was the future!!

--First pack reveals a Joe Thornton "Rookie"? I don't think that one is really considered a rookie card. Either way, it is stamped that way. Also, I got an ad for a Pinnacle Branded Screw Down holder for only 5.99 plus 2.00 S&H. What a deal.

--Pack 3: Team Pinnacle Koivu/Forsberg. I can't really tell if this is the mirror version or not. The front is glossy white/blue, the back (Forsberg side) is shiny mirror foil/blue. Either way, nice card!

--Pack 6: Marian Hossa, Boyd Devereaux, and Sergei Samsonov Rookies. I think the Hossa is probably the key rookie in this set.

--Pack 9: Donald Maclean and Olli Jokinen "Rookies". I forgot about Olli, he is probably the other key rookie other than the Hossa in this set.

--Pack 13: Terry Ryan and Chris Dingman Rookies. The second Ryan. It's safe to say at this point there is no chance at a complete set of these.

--Pack 14: Chris Phillips Rookie and...Brendan Shanahan Epix Play Orange. It's shiny. I don't have any others like this. I like it.

--Pack 20: There is no pack 20!! The audacity!! What happened to quality control? That's it. I wasn't going to but now I'm filling out that customer service survey that I got in pack 4.

So now it looks like I am going to have to break the other box. I will spare my readers the boring details and post only the good stuff next time as well as some of my favorite photography. I think if the photos are bad, they should be considered error cards. Stay tuned.
This Post Brought To You By TheRealDFG at 11:18 AM