I couldn't resist this one. I had to get my hands on some fresh 09/10 Hockey. The first release out this year is Upper Deck Victory. Walmart's shelves were jammed with them. 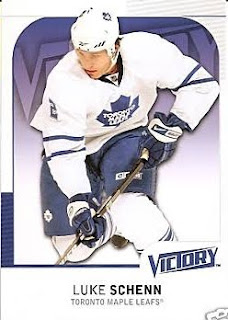 The first cards of the year are always exciting, even if they are from the UD Victory product. Victory has, over the past few years, had a standard "run of the mill" type design that has not varied much from year to year. The same goes for 09/10. This year features a lot more white space, if that was even possible. The borders are even more expansive than last year, with the images centered on the card and a more rounded feel to the edge. The insert sets feature the standard Victory Game Breakers and Stars of the Game, which showcase the top players on each team. The Victory Rookies feature many of the guys that played at the end of 08/09 and the design of the card is an improvement over last year, in my opinion.