An Intense Trade Post....The First One In Almost Forever

I originally set out to post about each and every trade that I did as a result of this blog.  The bottom line...I have sucked at it.  I have had so many trades in the last six months that I just couldn't keep up.  I was keeping each of the packages separated so that I knew what came from who but that started taking up too much space.  Then I started using a box and put in dividers with each trade's origination clearly marked.  Gradually, that wore out it's welcome to.  So I finally just gave up.

Well I am going to try and get back into the swing of things starting now.  I recently completed a trade with Mr. Green over at Drinking the Orange Kool-Aid.  I think when we first talked about making this deal go down (Baltimore stuff for Pittsburgh stuff) it was still 2009.  That may be a bit of an exaggeration but not by much.  At any rate, it was finally completed the other day.

Next up were a small stack of Pittsburgh Steelers.  Most of the cards were split between Hines Ward, Big Ben, and ex-Steeler Willie Parker (you are dead to me Fast Willie).  There were also a couple ex-Steelers and current resident of the New York State Penal System, Plaxico Burress.   A few Topps Heritage Steelers, including a Larry Foote card I was going to post last week, were also in here.  Here are some of the Steeler highlights. 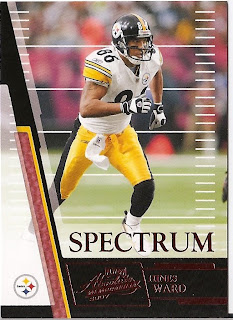 (It is hard to see but the wording on this is in red foil.) 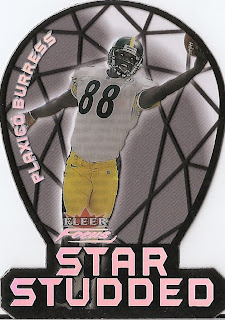 (Plaxico Burress in front of some bars.  Little did he know...) 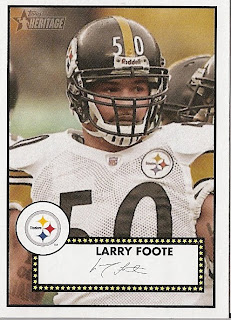 (Larry Foote...look at the intensity on his face.  And it's only practice.) 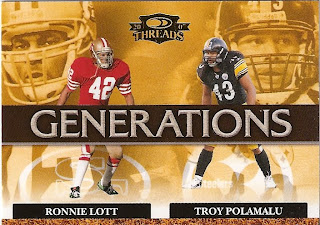 (Two of the most fierce defensive backs in NFL history.  Look at the concentration and intensity in their eyes...)
There were some Penguin cards in the box as well.  A few older 70s cards including a sweet looking team card that will be an upgrade to the one I already had.  This one is in much better condition.  There was also a Score Hot Card Mark Recchi which somehow I didn't have and I can't figure out why.  Finally there was an 87-88 Topps Paul Coffey which I also didn't have in my Penguin binder because apparently I only had one and it was in my set. 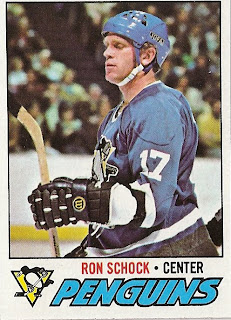 (I think I have a graded version of this one...maybe an 8 or 9, I think.  This one will most certainly go in the binder.) 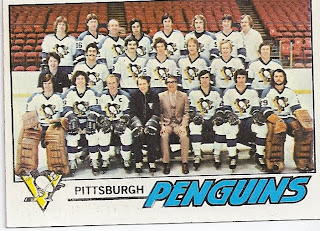 (Crooked because I can't operate my own scanner) 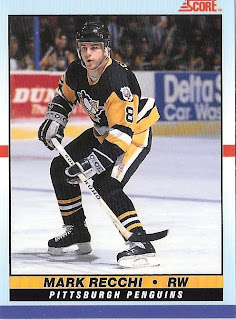 (As you can see, this is back when part of the uniform required wearing a fanny pack.) 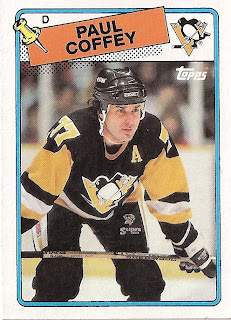 (Look at that intensity...it's...it's intense.)
This Post Brought To You By dogfacedgremlin at 9:00 AM