This week I realized that as I go through more and more cards of present and former players of my favorite teams, I tend to focus on the negative side of things.  I always have the memories of when a guy dropped a pass, or missed a check, or let in a goal from the blue line, or struck out, or missed a throw at home, or fumbled, or...well you get the idea.  Despite all the great memories I have had being a Pittsburgh sports fan, the negativity always trickles in to put a damper on things.  That's why I have decided that starting today, I am going to keep doing things the same way I always have.
Negativity breeds productivity; productivity breeds victory.  I don't know if I just made that up or not but it makes perfect sense.  The doom and gloom attitude has always been a source of motivation and success for me since it always seem to make me want more.  The more I want, the harder I work.  The harder I work, the better I get.  The better I get, the more I succeed.  You see the logic here?  Some would argue that all negativity leads to depression and defeat and that may be true for some.  But in sports, isn't it the team that lost always the one with that chip that motivates and pushes them to try harder so they can get over that hurdle?
Okay so now I am rambling.  Getting to the Random Steeler card for this week, we feature probably one of the biggest draft busts (so far) in the last 8 years for the Pittsburgh Steelers.  If not the worst ever, at least in my mind (and he will have to do circus-like feats of an inhuman proportions to prove me otherwise) he joins the ranks of Huey Richardson, Tim Worley, Troy Edwards and a host of other unmentionables.


Of course I am talking about none other than Wide Receiver extrordinaire, 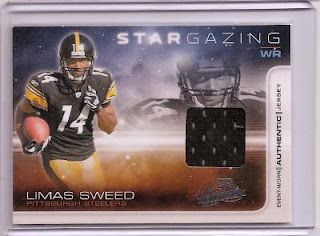 Limas Sweed.
The University of Texas star wide receiver was picked with the 22nd overall selection in the 2nd round of the 2008 draft.  After two full seasons in the NFL, Limas has caught a grand total of 7 passes for 69 yards.  Notice I said CAUGHT a total of...instead of "had thrown to him".  That list would be much larger but unfortunately most of those ended up on the turf or in the hands of the opposing team.  .

Sweed's career with the Steelers became an even bigger mystery when at one point last year, Sweed was placed on the IR with an undisclosed injury, and not heard from again.  Rumors spread about his focus and committment to football but the Steelers and for the most part, the fans, stuck by him.  Then Sweed tore his left Achilles' tendon during the team's minicamp earlier this month.  Not good for a player already skating that thin line.  He immediately had surgery to repair the tear and the team placed him on the reserved/injured list, subsequently ending his 2010 season even before training camp.

The killer part is the cash impact.  With an already strained salary cap, the Steelers now seemingly wasted $1.5 million in the rookie signing bonus and another $680,000 over the past two years in salary.  With his current pay for 2010 at $470,000, the Black & Gold will be on the hook for $2.66 million by the end of the season.  That's a ton of moolah for a guy with 7 catches.

So as I sit here with baited anticipation for the 2010 season to begin, it looks like Sweed will be lost for the year and have no chance to prove he can live up to expectations.  I haven't given up on him completely yet but unfortunately for him, if he doesn't make an effort to train hard and rehab that injury, his days with the Steelers could be over.  His only chance of making a roster spot as a spectator is going to depend on his desire and drive to still play football.  If it were me, I would be everywhere the team is, studying the playbook, observing all the practices, and basically taking every possible opportunity I had to stay visible.

This Post Brought To You By dogfacedgremlin at 10:00 AM