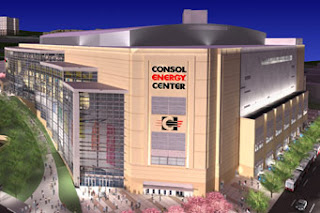 For any fan of a team in any sport, a new stadium spurns so many crazy ideas and thoughts about how it is going to reflect on the team itself.  Pittsburgh has seen its share of new digs over the last 10 years with both PNC Park and Heinz Field opening their doors in 2001.  The Civic Arena/Mellon Arena was the only facility in town hosting a major sports team that hadn't seen a make over or upgrade.  Going into this season, it was the smallest and lowest capacity facility being used to host an NHL team.

Next season will be a different story.  After a storied history in the nations first retractable roof stadium, the Penguins will be moving across the street to the new Consol Energy Center.

Seth Rorabaugh, journalist and blogger for the Pittsburgh Post-Gazette, recently posted on his blog Empty Netters a tour of the new stadium in its current state.  Even if you are not a Pens fan, or a hockey fan, you should check this out just to see some of what goes into the planning and construction of an arena.  Here is the article.

A Brief Tour Of Consol Energy Center
This Post Brought To You By dogfacedgremlin at 2:00 PM