So have you ever bought something on one of the auction sites and through no fault of your own, forgot?  That was the case with a couple cards from a fellow I purchased from about a month and a half ago.  You see, I was caught up in a whirlwind of buying online and in stores and trades that I forgot about this last group I picked up.

After about three weeks, I noticed the button was still active that I needed to leave feedback.  I couldn't remember why or what for so I clicked it and realized that there were still two cards that I had yet to receive.  So I sent an email to the seller, thinking he must have also forgot about it.  Within an hour, I had a confirmation number in my hands and a delivery confirmed notice...?

WHAT?  Are you serious?  I never, ever, received anything.  I know sometimes my wife hides my packages because she gets some kind of primordial enjoyment out of making me squirm but not this time.  They were sent a day after I sent payment so where could they be?  Maybe my mailman decided he wanted to keep them.  Maybe the neighborhood kids finally caught on as to what was in all those bubble mailers.  Maybe they were abducted by alien mutant space ninjas.

I inquired to the post office to no avail.  They simply confirmed they received them and then sent them out for delivery.  Since no signature was required, they could neither confirm or deny if they made it to their final destination, although I knew they didn't.  I finally gave up hope and sent the seller an email letting him know they were AWOL but it wasn't his fault and I didn't want a refund but wanted to bid on some replacements.  He, of course, thanked me, apologized, and then told me he had nothing else available for auction at this time.  Oh well.  Such is life.

FAST FORWARD TO YESTERDAY.  I get home and there on the counter is a small bubble mailer with a big green sticker on it.  The sticker reads "we are sorry the delivery of your package was delayed"...it continued, "there are many reasons why parcels are sometimes held up in shipping"...it goes on to list several...yadda, yadda, yadda....Love, the US Post Office.  So you are telling me that you temporarily lost my package but told the shipper they were delivered and told me the same thing only to turn around and miraculously produce it out from the crack between some sorting machine and the 3:30-11 shift supervisor's lunch pail?  I say...

Here is what I was waiting for.  Something tells me there are a couple people out there that would like me to try and lose them again by shipping 'em to their collections. 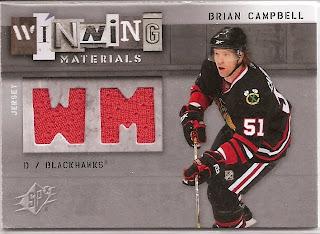 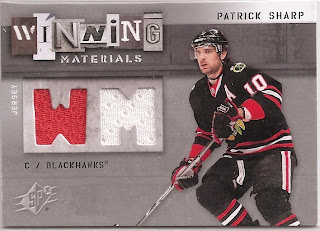 2009-10 SPx Winning Materials Patrick Sharp WM-PS (2-color)
This Post Brought To You By dogfacedgremlin at 9:00 AM