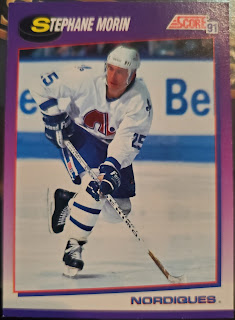 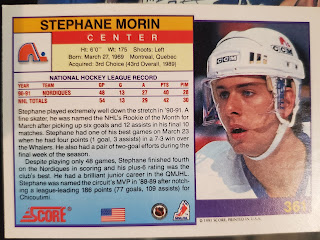 Stephane played extremely well down the stretch in '90-91. A fine skater, he was named the NHL's Rookie of the Month for March after picking up six goals and 12 assists in his final 10 matches.  Stephane had on of his best games on March 23, 1991 when he had four points (1 goal, 3 assists) in a 7-3 win over the Whalers. He also had a pair of two-goal efforts during the final week of the season.
Despite playing only 48 games, Stephane finished fourth on the Nordiques in scoring and his plus-6 rating was the club's best. He had a brilliant junior career in the QMJHL.  Stephane was named the circuit's MVP in '88-89 after notching a league-leading 186 points (77 gals, 1099 assists) for Chicoutimi.
Morin spent the majority of his hockey career in the minors but did appear in 90 NHL games.  Unfortunately after feeling unwell but still playing in the game, he collapsed on the bench from heart failure. The medical staff was unable to bring him back and he passed away. He was later diagnosed with chronic bronchitis and an enlarged heart.  It was suspected he had previous undiagnosed heart attack(s).
_________________________
Like what you read? Have a comment? Be sure to leave one below.
Check out TheRealDFG on Twitter @therealdfg.
Be sure to check out the latest #PuckJunkPodcast.
Just search and subscribe on Apple Podcasts, Google Podcasts, Spotify, iHeartRadio, Stitcher, Podchaser, PocketCasts, Castbox, Castro, Overcast, TuneIn or SoundCloud.
This Post Brought To You By TheRealDFG at 6:00 PM