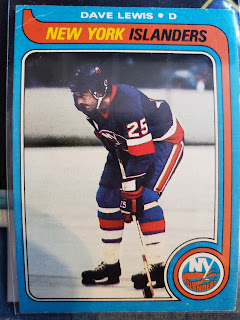 Another in a long line of career NHLers that went largely unnoticed while they played, Dave Lewis spent 16 seasons playing the sport he loved after being drafted by the Islanders in 1973.  He went on to finish his career with 36 goals and 224 points in over 1,000 games.
But Dave is probably best known as the assistant coach to Scotty Bowman for the three Stanley Cups in '97, '98 and 2002.  After Bowman retired, he became the team's head coach, leading them to two 48 win seasons and a President's Trophy.  He went on to coach the Bruins and spent time as assistant coach of both the Kings and Hurricanes.
Dave posted a Game-Winning-Goal for the Islanders in a game versus the Los Angeles Kings on this date in 1977.
_________________________
Like what you read? Have a comment? Be sure to leave one below.
Check out TheRealDFG on Twitter @therealdfg.
Be sure to check out the latest #PuckJunkPodcast. Just search and subscribe on Apple Podcasts, Google Podcasts, Spotify, iHeartRadio, Stitcher, Podchaser, PocketCasts, Castbox, Castro, Overcast, TuneIn or SoundCloud.
This Post Brought To You By TheRealDFG at 7:00 AM