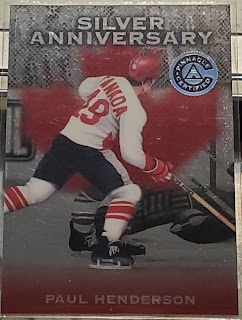 September 2, 1972 saw game one of what became known as the Summit Series take place at the Montreal Forum. The game was between Team Canada, arguably one of the best international hockey teams ever assembled, and the underdog USSR.

Phil Esposito scored 30 seconds in with Paul Henderson giving them a 2-0 lead only six minutes later. But then the tide turned, the red tide.  The Soviets regrouped and started to play their calculated attacking style of cycling the puck until a perfect scoring chance opened up.  They new they were better conditioned for a game of attrition and used that against the Canadian team that had only been playing together for about a month.  It was 2-2 at the end of the first period and the Soviets kept coming, scoring two more in the second, and scored three more, winning 7-3.

According to Paul Henderson, "They told us the Russians were an average team with a Junior B Goalie.  We Took a 2-0 Lead in Game 1, but they came back and beat us 7-3. Even though we won the series, we learned how good Soviet hockey was, and how good of a goalie Vladislav Tretiak was."