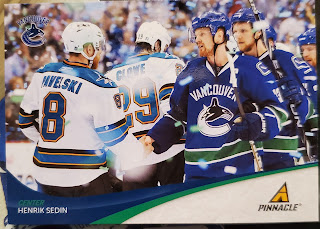 No matter how nasty a playoff series gets, regardless of how hard teams go at each other or how much players despise their opponents, when it's over, good sportsmanship always wins out.

The traditional handshake at the end of a series is a move unique to the NHL.  There were no hard feelings between Henrik Sedin and Joe Pavelski when the Canucks finished off the Sharks in Game 5 of the 2011 Western Conference Finals on May 24, 2011. Or at least, there were no hard feelings expressed at the moment. What goes down after the losing team leaves the ice is a whole different ball game that the cameras don't always capture.

Regardless, this is just another example of why hockey is the greatest sport on the planet.