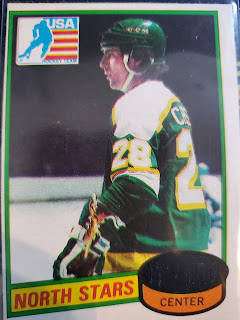 Steve Christoff was a superstar growing up in Richfield, Minnesota.  As a member of the Richfield High School hockey team, he was MVP two years in a row, selected All-State First Team, and US High School All American. Going on to play at Minnesota for the Gophers, he led the team in scoring multiple years and helped them to their 3rd NCAA title.
In the NHL, he set the rookie record for playoff scoring with 8 goals for the Minnesota North Stars. But on this day in 1980, Steve scored the game tying goal in the second period, stealing the puck from the defender and backhanding a shot past Finnish goaltender Jorma Valtonen.  He was also credited with an assist on the game-winning goal to seal the gold medal for Team USA.
_________________________
Like what you read? Have a comment? Be sure to leave one below.
Check out TheRealDFG on Twitter @therealdfg.
Be sure to check out the latest #PuckJunkPodcast. Just search and subscribe on Apple Podcasts, Google Podcasts, Spotify, iHeartRadio, Stitcher, Podchaser, PocketCasts, Castbox, Castro, Overcast, TuneIn or SoundCloud.
This Post Brought To You By TheRealDFG at 7:00 PM