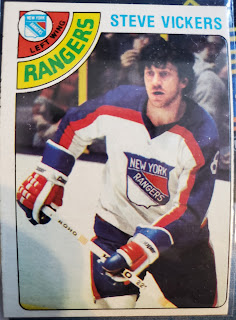 Steve Vickers was drafted by the Rangers in the 1971 Amateur Draft. The 6' 0", 185lb winger went on to win the Calder trophy in his first season with the club.  Vickers is probably best known as kicking off the scoring :21 seconds into the 1975 game versus the Central Red Army Team from Russia. This was the first time an NHL team faced off against the Moscow club, with the Rangers ending up losing 7-3.
In 1978-79, Steve held the Ranger's club record of 7 points in one game. On this date in 1976, Steve tallied 3 goals and 4 assists in a game versus the Washington Capitals.
_________________________
Like what you read? Have a comment? Be sure to leave one below.
Check out TheRealDFG on Twitter @therealdfg.
Be sure to check out the latest #PuckJunkPodcast. Just search and subscribe on Apple Podcasts, Google Podcasts, Spotify, iHeartRadio, Stitcher, Podchaser, PocketCasts, Castbox, Castro, Overcast, TuneIn or SoundCloud.
This Post Brought To You By TheRealDFG at 7:00 AM