That's New To Me

Going to large card shows gives you the opportunity to sometimes find things you have never seen before or ever knew existed. The National is the largest show in the US each year and it is the perfect place to hunt for things of this nature. While perusing a quarter box at one of the dealer tables, I happened upon these. 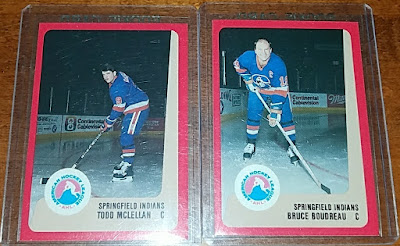 Pardon the glare on the photos but here we have two cards that I had never seen before. They are from the 1988 ProCards team set of the AHL Springfield Indians. What caught my attention wasn't flashy foil or autos or memorabila patches. It was that the only two random cards from this set in that box feature two current NHL coaches, Edmonton's Todd Mclellan and Minnesota's Bruce Boudreau. Coincidence?

Apparently the set, along with those of other AHL teams, was produced during the 1988-89 season and was offered for sale in the pro-shops of the respective arenas around the league. You could also send away for a set directly through the mail. The cards feature a red border on the front with a rose colored hockey stick-shaped inset. The players team, name and position are printed on the "blade" of the stick and the AHL logo appears like a hockey puck on the left. The interesting thing is they aren't numbered sequentially. In fact, they aren't even numbered at all. When packaged, they were in alphabetical order, apparently.

There were a couple other notable players included in this set too. Tom Fitzgerald, a former first round draft pick that spent most of his career with the Islanders, Panthers, and Predators, is included. He also has a Stanley Cup as director of player development back in 2009 when he was with the Penguins organization. The other NHLer...Jeff Hackett.  Jeff went on to help the Indians win another Calder the next year and he was voted Playoff MVP. He spent most of his 15 year career with the Blackhawks and the Canadiens.


This Post Brought To You By TheRealDFG at 2:34 PM