Redemption Song: For My Son!

For those of you that follow my Twitter account, you probably already saw this one earlier.  But for those that don't...what's wrong with you?  Just kidding.  Let me explain.

I generally try to involve my children (I have two of them) in my hobby as much as possible.  I wasn't exposed to this hobby by another adult.  It was by kids my own age with similar likes and interests.  These days, it just doesn't work like that.  Kids don't do a lot of collecting on their own and are more interested in other hobbies.  Nonetheless, I get them involved by showing them what drove me into the hobby in the first place...that connection between the cardboard and real life.  Whether it's the game photos, stats on the back, write ups about the player, or simply putting things in order by name, number, position, etc., there are engaging ways to get kids into collecting.

But that's a totally different subject for another time.

I took the boys with me to a card show in Chicago a few months back (November to be exact) and they both got to split a hobby box of Topps Football.  The excitement of them splitting the box, choosing which packs to open and then battling out who got the best cards in each pack was priceless.  But one of the packs that my youngest son opened contained the all too familiar Blue Topps Card with the word "CONGRATULATIONS" across the top.  Yes, he pulled a redemption.

How do you explain a redemtion to a six year old?  Well you don't.  We are saving that for another post as well.

This one was different though.  It was for an Uncut Sheet.  I hadn't seen these pop up at the time but wondered just what that entailed.  Regardless, as I always do, I gave him a choice.  Would he like to sell it and see what he could get for it or redeem it and see if he gets the item.  His choice was to redeem.

Fast forward through months of waiting, every other weekend being questioned as to whether it arrived yet, and watching his disappointment as we checked the status online only to see that it was still in process.  Today in the mail.  It arrived.  And it was HUGE!!!  Huge enough that it had to be signed for.  Huge enough that it almost towers over Mr. D (which isn't saying much since he is six after all).  Without further adieu... 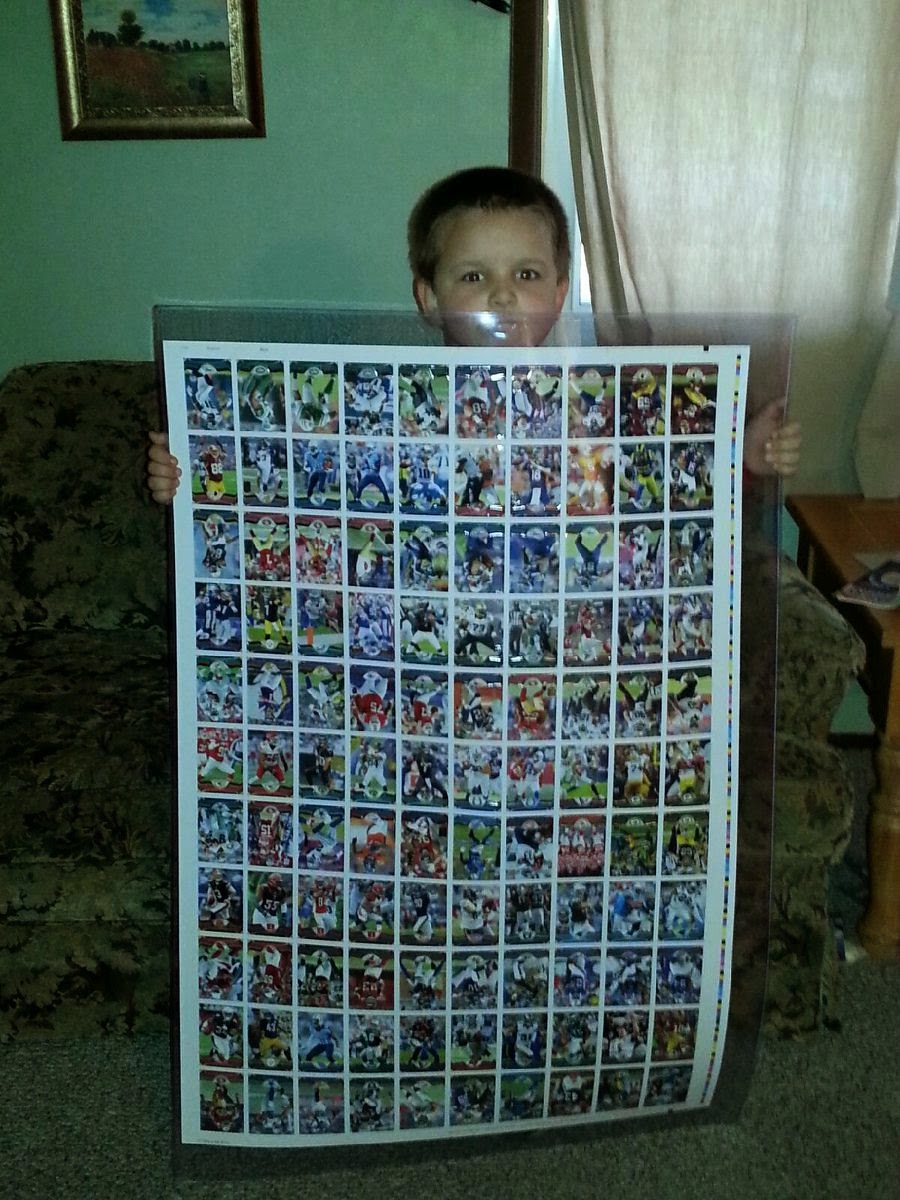 Thank you, Topps for actually sending this.  While I was pretty sure it would get here someday, there was that brief moment of doubt where I thought it just might not ever arrive.  You have made this little guy very happy.
This Post Brought To You By dogfacedgremlin at 6:00 PM