It's time to wrap up the year that was 2013 and ring in 2014.  What better way than to do another in a long line of ad nauseum Top 10 lists.  Hooray for Top 10 lists!!  But what's better than a Top 10 list?  How about a Top 8 list!!  Plus, as a double whammy, it's going to showcase more stuff in my collection and many people out there will consider it to be bragging.  Hooray for bragging!!

I was looking over some of my card scans and things I had posted to Twitter over the last year and decided to put everything together in one nice little package.  In order to qualify for the list, all the cards had to be obtained by pulling them from packs.  No single purchases, no trades, no "freebies".  Everything came directly from a pack or was redeemed from a card pulled from a pack and obtained in 2013.

Drumroll please!   Here they are (again) for your viewing pleasure. 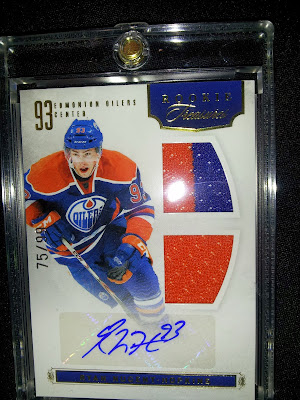 Back in March, I opened a box of 2011-12 Panini Rookie Anthology.  This little Rookie Treasures beauty was peering at me from inside.  It features two swatch pieces with one being dual-colored.  It has a sticker auto but isn't horribly affixed like some of these I've seen.  The card has cooled way off on the secondary market since I released it from it's cellophane tomb.  That's most likely because of RNH's play at the end of last year and his season ending shoulder injury.  He has come out pretty strong this year despite the misery of playing in Edmonton.  He has 29 points this season but his -10 +/- rating makes that a little rough.  Then again, not many guys on Edmonton can consistently play in the positives because of their horrific defense and goaltending.  Maybe his pairing with Taylor Hall and David Perron will help him get back into the spotlight.  I was offered a nice Benjamin Franklin for this card not long after I pulled it but decided to hang onto it. 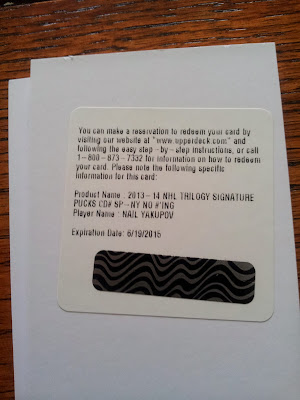 This baby was pulled but has yet to arrive.  I haven't seen anyone with an actual redeemed card yet either so I imagine this might be something that doesn't show until after the season (if at all).  I would have rated it higher but since I don't have any idea what it is going to look like, it remains at number #9 on my list.  I pulled this from a box of 2012-13 Upper Deck Trilogy that I opened earlier when the season started.  Yakupov was supposed to be another in a long line of offensive weapons for the Oilers but has so far been a bit of a disappointment for Edmonton.  So much so that trade talk has been rampant and Nail has gone on record as saying that although he wants to play for Edmonton, he would be glad to go if they aren't happy with him.  He has only 14 points this season and averages just over 14 minutes of ice time per game and much like RNH, he is atrocious in the +/- department.  In addition to this one, I also pulled a redemption for a Tarasenko Level 1 auto as well.  I have not received that card either. 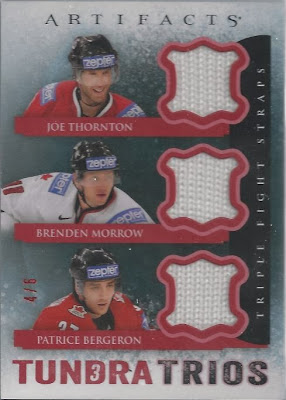 This card came from a box of 2013-14 Artifacts.  I usually open a few boxes of these each year but I don't recall pulling anything as short printed as this card (except a few one/one's a couple times).  It is numbered #/6 if you can see that in red foil there on the left next to Patrice Bergeron.  The other awesomeness involved here is the fact that all the guys are featured in their Team Canada uniforms.  They kept that consistent with the graphics and that makes for a much nicer design.  But by far my favorite is that they aren't just plain white swatch jersey pieces.  These are all fight strap pieces.  Excellent.  The player selection could be better but I'm not complaining one bit. 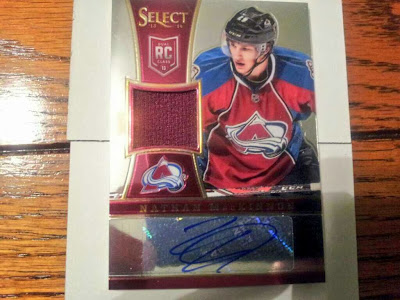 My Christmas presents were very, very good to me this year.  I opened a box of 2013-14 Panini Select Hobby that was sitting nicely wrapped under my tree.  Despite my last couple boxes of this product that I was less than thrilled with, the third time was definitely the charm.  Nathan MacKinnon has come out in Colorado and made a name for himself, helping to put the Avs back into the NHL post-season conversations.  He has 21 points thus far this season and is a contender for the Calder.  This guy has been floating around the $100 mark much like the RNH card at #10.  I think as more of these hit, the price will surely start to dip but barring any injuries, I think MacKinnon is the real deal and will be a force in the hobby for years to come. 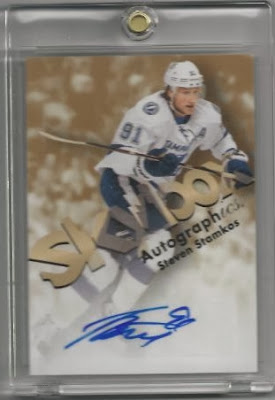 Sorry for the blurry scan but I think you get the idea here.  This was pulled out of a box of 2012-13 Fleer Retro Hockey.  It's a 1999 Retro Autographics auto card of Steven Stamkos.  Fleer Retro was an awesome set packed with value in the subsets, short prints, and autographs.  The boxes were a bit pricey when they first hit the streets but they eventually cooled off.  If you can get a box of them for under $100, do it!  You won't regret it.  This isn't the first Stamkos auto I have ever pulled.  It's the second.  But it's the best looking one.  This is the first full-sized card with his auto.  If it wasn't for the sticker, it would have been perfect.  But I won't complain too much about getting an auto of this perennial Hart Trophy and Richard Trophy candidate. 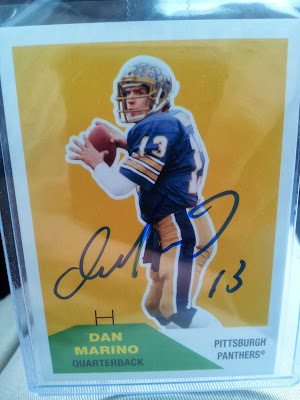 I wanted to put this card much higher on my list because...well, just look at it.  I used to have a Dan Marino autographed 8x10 black & white photo from when I was a kid.  It featured him dropping back to pass, much like this pose, and was taking while he still played for Pitt.  In fact, that's when I received the auto because a family friend knew his parents real well and somehow I was the beneficiary of that.  Fast forward 10 years or so and that auto went missing, never to be heard from again.  It took me almost 30 years to replace it but I think this one will suffice.  I pulled this from a box of 2012 Fleer Retro.  It was a redemption card that came in a couple months ago. 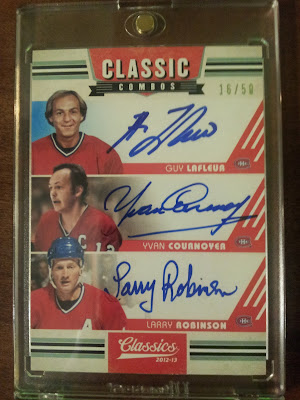 Not one.  Not two.  But three hockey HOFers on this card.  Back at the same show I pulled the RNH card, I picked up a box of 2012-13 Panini Classics Signatures for a heck of a steal at the time.  These boxes yield you an autograph in each pack, or six per box.  The best part, they are all veteran guys that have since retired, many of which taking their place in the HOF.  This came out of the box as a redemption card and I hesitated for almost four months before finally scratching away that silver foil.  Seeing this card now, I'm so glad I did.  This card looks amazing in person.  The autos are all fairly legible because guys of yesteryear actually take their time and pride in their signatures.  This is another card that generally floats around the $100 mark but I'm not sure this one will ever be pried from my hands. 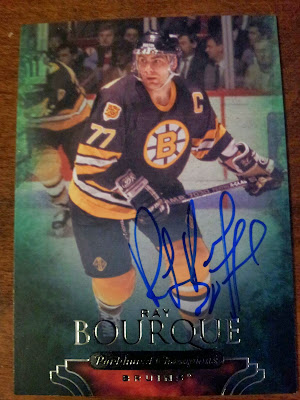 And last but not least, the number one card.  I have opened my share of 2011-12 Upper Deck Parkhurst Champions.  In fact, I'm thinking it is somewhere around 5-6 boxes.  Well, the Black Friday sale at D&A Cardworld was too good to resist and I added this one to my cart just to help pad for shipping.  Boy was I shocked when this came sliding out of one of the last packs in the box.  Not only is this an on-card auto of Ray Bourque but it's one of the low production tiered autos from the set.  Almost all of the subject matter for the set has an auto but many are available much easier than others.  The Bourque is part of Group A which falls about 1:696 packs.  In my perusing online, I have yet to find one of these on the secondary market.  In fact, with the exception of a couple mini-group A's, I have seen nothing but group B-F autos available out there.  So considering this is pretty rare, I will most likely hang on to it for awhile.

I hope you have enjoyed this little trip down memory lane.  I certainly have since I can look back on these as not only the best pulls of 2013, but some of my best pulls ever.

Thanks for reading and HAPPY NEW YEAR!!

This Post Brought To You By dogfacedgremlin at 2:36 PM