The fifth installment of a the Sunday Steeler 6-Pack, on schedule at normal time.  There are two this week because I inadvertently forgot last weeks.

Each Sunday of the NFL season, I will feature 6 random cards from my Pittsburgh Steelers' PC.  There is no rhyme or reason for any of them, just 6 random cards I pull out of one of my many boxes or binders of black and gold (and there are MANY) and maybe a comment or two. 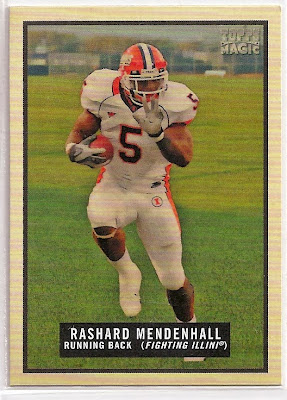 Here we have Mendy in his Fighting Illini uniform.  This was a feature of the Topps Magic set in 2009. 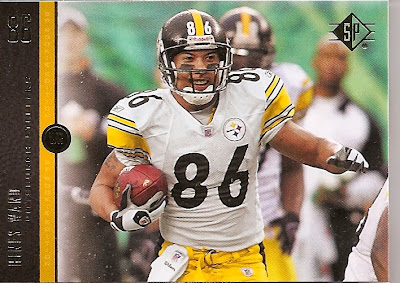 Hines Ward was considered by many NFL players as "dirty".  Those guys were evidently the ones that he knocked on their asses each week.  And he did it all with a smile on his face. 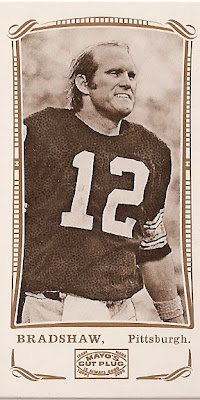 Another TB mini.  This time it's a Mayo's Cut Plug Mini.  Not sure where I got this because I know I never opened any of that product. 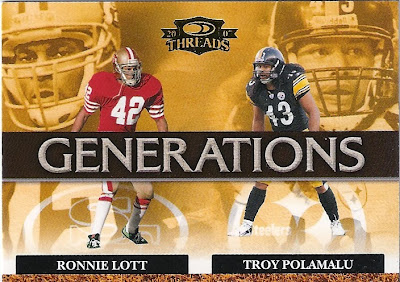 Two guys with some of the most ferocious hits of all time.  Did you ever see Ronnie Lott's fingers?  They are gross.  Seriously gross.  Imagine how much faster Troy would be without the wind resistance of his hair... 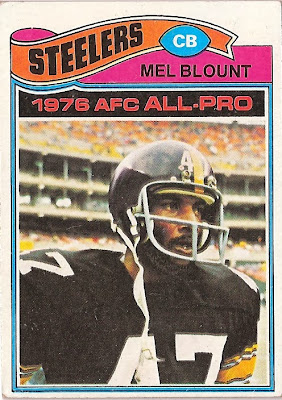 Mel was always one of my favorite Dynasty Era Steelers.  The guy was arguably one of the most physical cornerbacks of his day, roaming the secondary, looking for a guy to knock his head off.  They don't make him quite like Mel today.  Closest thing would probably be Troy but even that is a stretch. 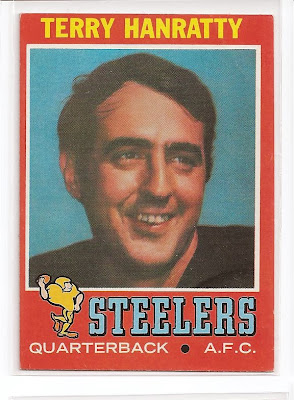 Hanratty was drafted in 1969 to be the starting QB.  He played a few games as starter but was quickly replaced by the #1 pick in 1970...Terry Bradshaw.  He spent the majority of the rest of his career backing up Terry, suiting up for a Super Bowl and playing in another.  He was also picked in the expansion draft by Tampa Bay and has the dubious distinction of helping lead them the only win less season in NFL history.
This Post Brought To You By dogfacedgremlin at 8:00 AM