It's Not A Card, But Still Very Cool

At the Sun Times show a few weeks back, I mentioned I did some trading with some other collectors.  One of those fine fellows was Sal from Puck Junk.  Sal needs no introduction to the hockey collecting community so I will save my breath and just link to his site.

At any rate, Sal generally takes the trading thing to a whole new level with not only the cards you are looking for, but even more rare pieces that you don't see everyday.  This time was no different.  Sal presented me with a little something that was quite awesome.  Here it is... 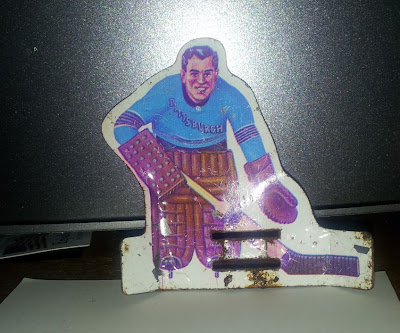 You can see some serious wear and tear on here, mainly around the creases in the tin and around the slot holes where the paint is chipping.  But other than that, the colors are still great.  Those old Pens jerseys are classics.

And then the back... 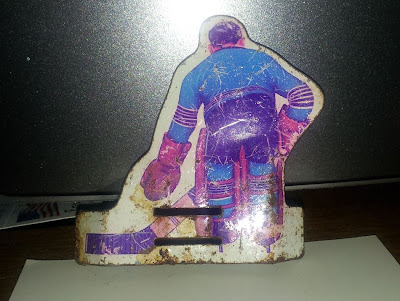 Much more wear and tear and what looks like some weathering.  Probably someone had this in a basement that was damp so the tin started to corrode.  You can see lots of scratches on the back of the goalie, probably from rubbing up against the net on the playing surface.

So where did this come from??? 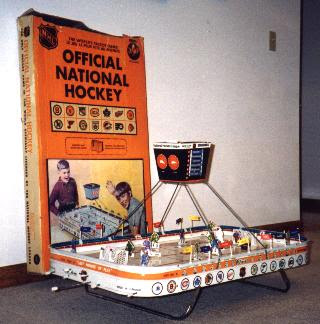 Back in 1954, Eagle Toy Company of Montreal began producing a metal version of the already popular rod hockey/table hockey games from decades earlier.  Eagle's difference?  The previous games made by companies like Munro Toys were made of wood.  Eagle received the endorsement of the Montreal Canadiens and was one of the first games to feature detailed player images, team logos, and because of the metal construction, allowed 360 degree player movement.

For years, Eagle and their competitor Munroe, were huge in the industry.  Each release throughout the 50s and 60s got better with more realistic looking players, the addition of goal lights, timers, automatic puck droppers, and other interesting "upgrades".  The games continued to be produced throughout the 60s and 70s, but more companies got into the game as the years went by.  When the NHL expanded in 1967, demand increased in the US market and production had to expand too.  Eagle was sold to a company many of you may remember, called Coleco.

By the mid-late 80s, the popularity was waning for toys that didn't have buttons, run on batteries, beep, or have video screens.  While the table hockey games were gradually losing popularity in the US, demand in Canada was still high.  Some new companies got into the game, with Coleco selling off their rights to their designs.  Even The Great One himself put his name on a version in the early 90s. 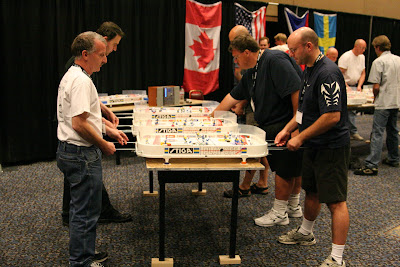 This is from the 2011 Let's Play Hockey International Expo in Las Vegas.  Yes, they still have tournaments.

Getting back to what I have here, Sal gave me the goalie of the Pittsburgh Penguins team set from, what I think is a 1971 Eagle Toys game.  Based on the short amount of research I've done, it doesn't appear that there was a set made with the Penguins included (unless it was regionally).  The Pens, as well as many other teams had to be ordered for the grand total of 75 cents per team plus shipping.  You can see by the wear and scratching that the less than stellar defense of the early Pens teams put a beating on their only goaltender.  So like many toys of yesteryear, this one was well loved.

But finding items like these in decent condition is tough, especially in recent years as collectors have gotten much more nostalgic and want to find the toys of their youth.  I have seen a few team sets in nice shape go for as much as $100+.  The Pens set that is supposedly in it's original packaging that is out there for sale now is priced at $65.

This is a very cool piece for my Penguins collection.  A little different but definitely a keeper.
This Post Brought To You By dogfacedgremlin at 7:00 AM