One of my goals when I go to a big show like the one a couple weekends ago at the Convention Center in Chicago is to bust some wax.  98% of the time I am successful at that goal but the quality of the products sometimes leave something to the imagination.

This time, after many months of debating whether it was a good deal or not, I decided to take a stab at Panini Classics Signatures.  This product is the first time Panini put that name to their hockey line of cards and I'm sure, won't be the last.

The reason for my early trepidation on purchasing the product was the price point.  It was running upwards of $180 per box for basically 30 cards.  That was way out of my price range for a product considered mid-high end.  But the more I saw of the boxes being opened, and the more product ended up on the secondary market, the more I started to swing my vote to the "yay" side of the argument.  Finally, at the show, boxes were down under $115.  It was time to get off the fence. 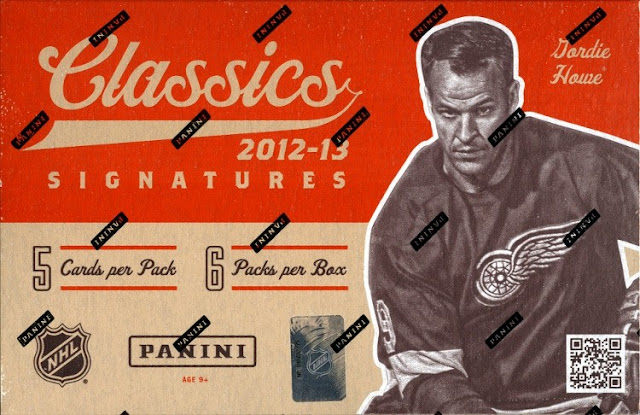 Before I show off what was in here, I'd like to point out that there were a few things I like about the product and a few that I don't.  First, my issues.

1.  The price point.  I already mentioned it above.  $180 was just too steep of a price for what I was initially seeing coming out of the box breaks.

2.  The checklist is just too large for a mid-high end set.  I love the fact that Panini went all out to try and get 200 of the best legends that have ever played the game into their product.  But precisely for that reason, this shouldn't have been a $180 box out of the gate.  100 cards is probably the max that any product like this should have been.  Save the rest for short prints, inserts, and other goodies (a la Parkhurst Champions).

3.  The card design is just too plain and under the radar for a higher end set.  I could even live with that if they would have used more of the card for the photos.  But you can't win them all.

But despite those facts, there is still a lot to love about this set.

1.  The Autographs.  There are a ton of autos jammed in this product.  At one auto-per-pack, every break is bound to turn a hall of famer or two.  Plus with the Line Combo cards, there is the potential for dual and triple autos of some great linemates.

3.  The photography.  While the card design leaves something on the table, especially for a higher end product, the photos used on the cards themselves are terrific.  Nostalgic is the only word that comes to mind when looking at player cards with old jerseys, teams that no longer exist, and logos that have been changed once or twice since these guys laced up their skates. 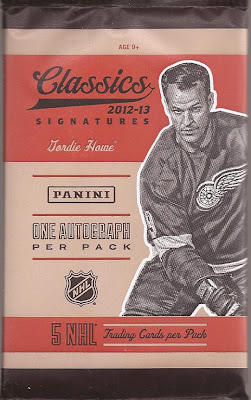 I won't leave anyone in suspense any longer and I will get right to showing off what was in here.  The box configuration is 5 cards/pack, 6 packs/box for a total of 30 cards.  There is also one autograph card per pack for a total of 6 autos.  I don't believe this set has any memorabilia cards.

First, the base cards... 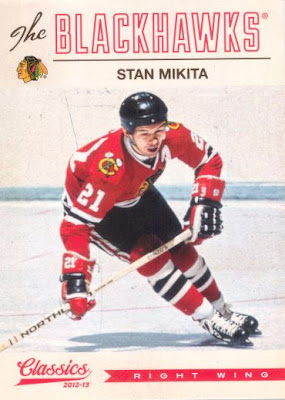 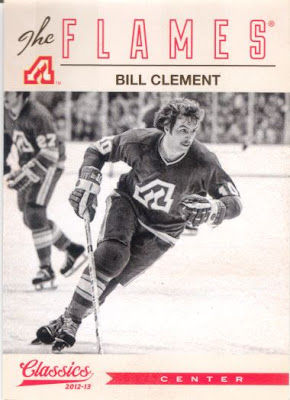 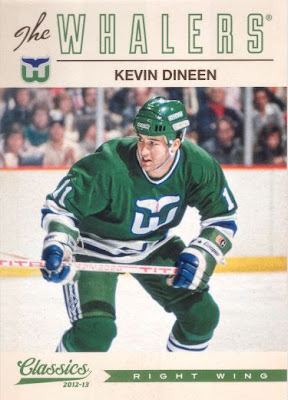 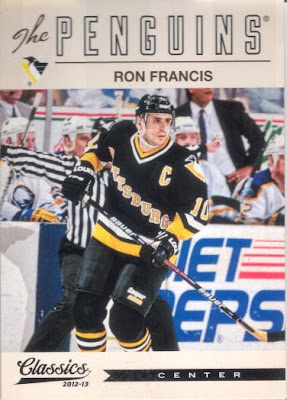 As I said, the base card design kind of leaves a bad taste in your mouth, especially if you paid the MSRP initially at $180.  These kind of look more like a design for the basic Score, Donruss, or Pinnacle sets (minus the Nufex).  However, as I said before, the player selection and photos used are great.  Here we have Stan Mikita, now announcer Bill Clement in the old Atlanta Flames uniform (there are B&W photos mixed with color), Kevin Dineen in the classic green Whalers jersey, and Ron Francis sporting the Captain C for Pittsburgh.  You can tell the time frame of the Francis by looking at that old Diet Pepsi ad behind him.

There were also Retired Number Banner cards too.  These fall at a rate of one per pack.  Here are the six that I pulled... 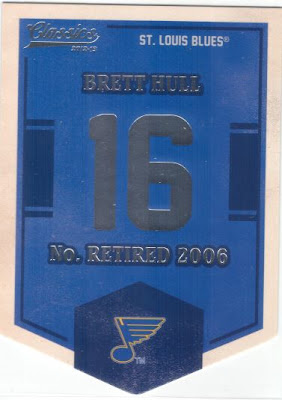 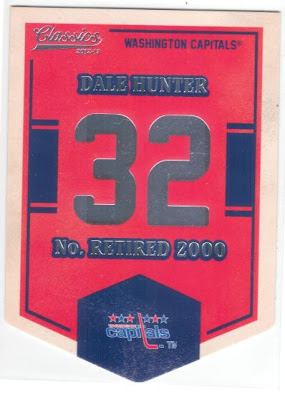 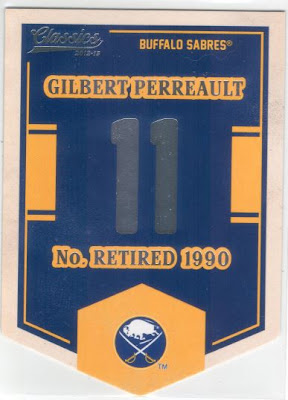 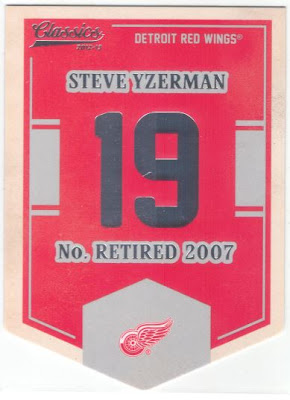 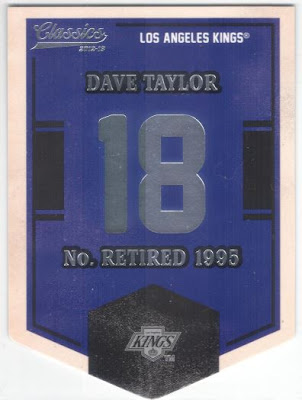 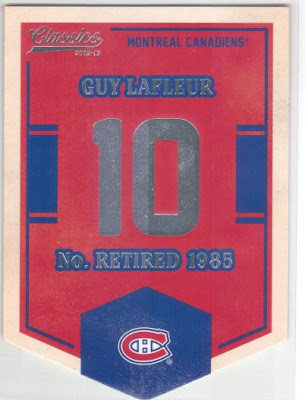 But I'm sure what everyone came looking for was to see the autographs that were pulled.  Here they are in no particular order...

If you were a Flyers fan, this would have been a great box.  Not one, not two, but three Flyers autos. 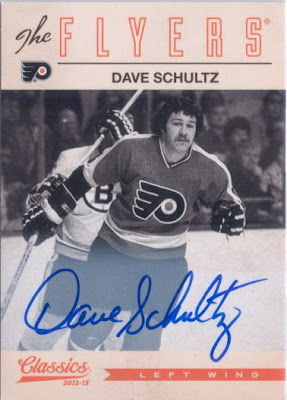 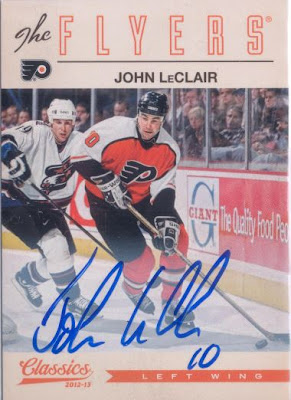 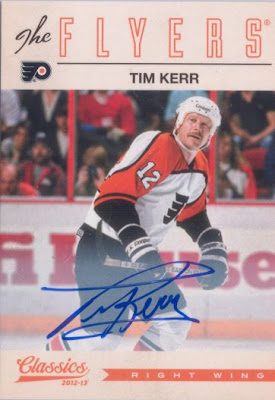 I even pulled two Kings autographs.  One of a player I already had an auto of, one with an epic goalie mask. 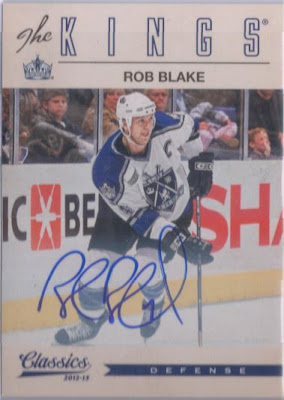 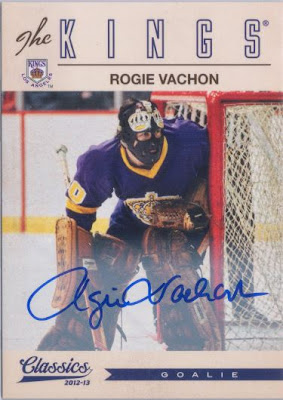 And the one auto that I was kind of excited about was this... 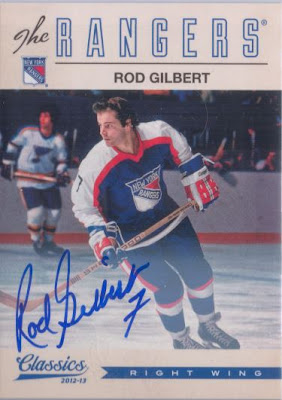 The first Ranger to have his number retired and a member of the famed "goal-a-game" line, Rod Gilbert.  Look at how neat that signature is.  He even put his player number.  I also like how he didn't want to cover up his image with the auto so he put it over on the side below his stick.  Very nicely done. 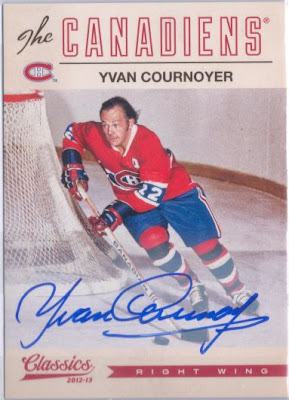 For some reason, six autos weren't enough.  This box had 7.  And what an auto to have as a bonus.  When I saw this card of the Roadrunner in here, I first thought it was Guy Lafleur because anytime I see a Hab without a helmet I seem to think it is Guy.  But Lafleur's linemate, 10 time Stanley Cup winner and HOFer is just as good in my book.

I don't know if this can be considered a "hot box" or not with the bonus autograph but this might give it that extra push... 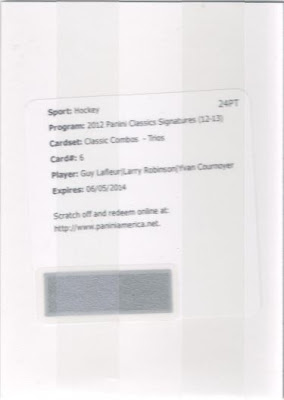 If you can't see it because of my crappy scan, this is a redemption card for a Classic Combos - Trios auto of Guy Lafleur, Larry Robinson, and Yvon Cournoyer.  That's right!!  A triple auto card of three of Montreal's greatest legends.  As far as I can tell, this one will be numbered either out of #/50 or #/25.  Either way it was quite a surprise.

So if you consider the autos by themselves, this box yielded 10 autographs.  Not bad at all for the price point, although at the normal rate of 6, it would still probably be a good deal assuming I would have pulled the same types of cards (including the redemption).

Overall, I like this product but just wish Panini wouldn't have gone so crazy with the checklist.  There is some potential for big cards and from what I can tell so far, a great secondary market for the ones that don't fit your collection.
This Post Brought To You By TheRealDFG at 7:00 AM