I got an email a while back from a reader that was interested doing a trade so I obliged.  Why wouldn't I?  This is what the hobby is all about.  Since I haven't done a trade post in quite a while, I figured now was as good a time as any to chalk one up on the board.  So if you are one of the many that hates Trade Posts...change the channel now.

My new friend Shane offered up some trade fodder that included some Penguins as well as some set need love.  We are always in need of some set building love.  All he asked in return was some reciprocation on the set needs.  Let's do it. 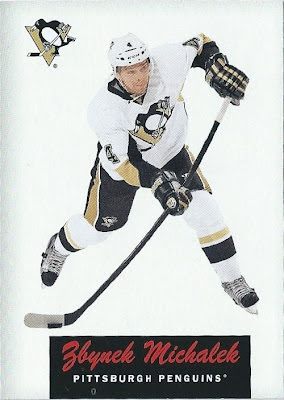 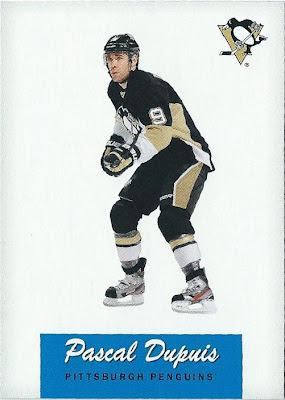 First there were two 2012-13 OPC Retro Penguins.  We have Zbynek Michalek and Pascal Dupuis.  Matt Niskanen was offered up too but I already had one and I'm not greedy.  These put me two steps closer to the team set of retros. 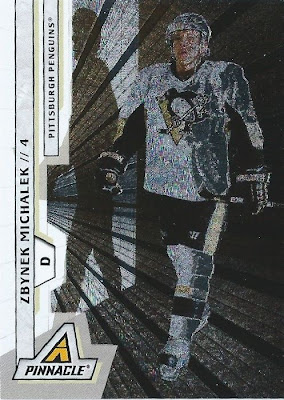 Next in the mix was another Zbynek Michalek.  This time it was a Pinnacle Rink Collection parallel from last years collection.  The Nufex material doesn't scan very well but this doesn't look too bad.  I thought I had this one too but after I shuffled through a box or two of Pens cards, I realized I must have been mistaken. 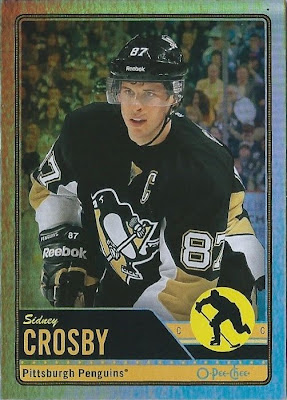 Next up was this awesome Crosby Rainbow card from this years OPC set.  I pulled a Crosby shiny a few years ago but now I don't have to for this years set.  I thought about putting together at least the Rainbow foil set of just the Pittsburgh players but I haven't decided for sure yet.  It is tough to track all these down sometimes.

There were also cards for some sets as I had mentioned.  Shane threw in 9 O-Pee-Chee cards from this years set.  He also tossed in 9 2009-10 Artifacts cards that I needed for my base set.  That was pretty much all we had discussed.  He had a couple others in there which I took a pass on and when all was said and done, I sent him 80 or so "commons" from the base 12/13 OPC set.  Based on that, it seemed fair to me.

THERE WAS THIS BEAUTY!!!! 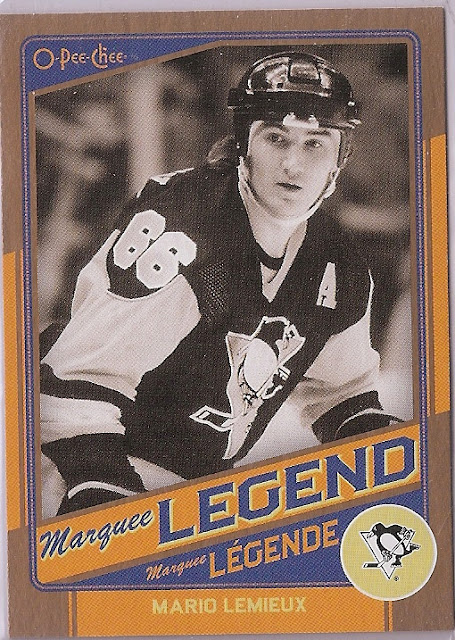 For those not familiar, this is a Marquee Legend Gold Variation Mario Lemieux #G6.  These are available one in every retail Hanger/Box Pack.  The traditional Rack Packs don't have these.  But there is a special box, quite similar to the Topps Baseball/Football Hanger boxes, that contain a cello wrapped pack of cards. Those yield these little beauties!  There are 10 cards in the set and they include the likes of Bobby Orr, Bobby Hull, Patrick Roy, Joe Sakic, Mark Messier, Wayne Gretzky, Jean Beliveau, Eric Lindros, and Brett Hull.

All I know is, this isn't just some run of the mill parallel card.  Not to me it isn't.  Now I feel like the trade suddenly tipped in my favor.  Since I know Shane is a big Patrick Roy fan, I will have to have something sent his way to even this thing up in the near future.

Thanks a bunch, Shane!!!

This Post Brought To You By dogfacedgremlin at 9:38 PM