My "Outrage" Over the OPC SPs Has Subsided

I build the O-Pee-Chee set every year.  I have yet to complete one, but I put forth an effort to do so.  This year is no different regardless of whether there is no product on the ice to coincide with my cardboard fixation.  Upper Deck did a few interesting things in this years set which I have posted about before including:  stickers, pop-ups, retro parallels, rainbow foil parallels, black foil parallels, etc.  There were even black & white cards that remind me of the baseball "deckle edge" equivalent, inserted at a rate of one in a million (slight exaggeration but not much).

Well in my travels of busting OPC (which included 2 hobby boxes and a couple blasters) I came across what I thought was this little nightmare... 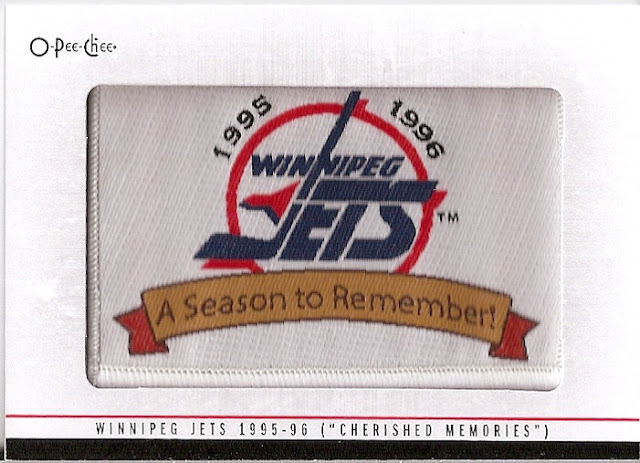 I didn't post about it before in my mass OPC postings a couple weeks ago because I really didn't know what it was and didn't really care.  Frankly, I was kind of disappointed that these were included in there because I wasn't a big fan of the manufactured patches that Topps has been doing for the last few years in baseball and football.  A few of them were cool and well designed but most were just filler in my mind.  Why should Upper Deck jump on that bandwagon and desecrate one of my favorite hockey products with manufactured junk?  And JUNK is exactly what I thought it was.  I figured it had to be some kind of per box insert that I just got shorted in the second box.  I really didn't think about it much after that because, as I said, I didn't care.

Well that was until I realized that these things are "HOT"!  The new Beckett came out with their listings and I was shocked.  SHOCKED!!  I don't generally rely on the values in the guide because 90% of them are unrealistic, especially for newer cards.  The market dictates the value and places like Ebay, COMC, the Beckett Marketplace (not the guide), and other retailers are the market.  So why so surprised???

I just checked Ebay's completed listings for these.  SHOCKED!! AGAIN!

The key card to these seems to be the Vancouver Canucks Cartoon logo.  It is listed in Beckett for $350 and has fetched $383 and $175 respectively (although the later was listed much higher and had a OBO).  They are numbered #100 which considering the odds, I suppose I get it.  The Washington Capitals "9-11" patch managed to pull a cool $160.  The Predators Cartoon logo fetched $120 and the Gretzky Retirement Patch pulled $150.

I guess I shouldn't be as upset with these anymore but I still don't like them.  I don't like the design.  I don't like the concept.  I don't have any desire to keep this, either.  So I suppose I should try to strike while the iron is hot and the market isn't flooded with them, don't you think?
This Post Brought To You By dogfacedgremlin at 9:55 PM