(This is one of my lost posts that I started a few/couple months ago.  I have since over indulged on Archives and would be glad to help anyone else out on base set completion.  I even have them sorted in order if you can believe that.  This was my first exposure to the product back when it was "new".) 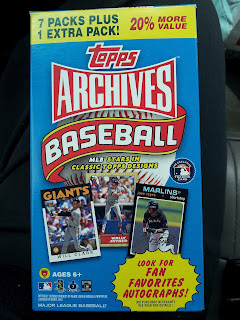 I don't buy a ton of baseball product.  Usually the base Topps series and maybe a few Heritage or a couple retro sets if they are out there (A&G or Gypsy Queen).  I am not really even a big fan of baseball as a whole and I've discussed that on here numerous times.  I still hold the Pirates near and dear to my heart but lets face it, they haven't really been the most fun to watch for, oh....the last 20 years or so.  Plus, I have a hard enough time not having a heart attack every time the Pens or Steelers are on.  I couldn't take another sport that makes me crazy.  So I generally sit idly by in the proverbial baseball corner and just watch the festivities of others.

But this year, Topps put out the Archives set which was supposed to be kind of a throwback to the Fan Favorites sets of old.  Instead, it has amassed what may very well be, as many haters as it has fans.  I will throw myself out here and join the masses of fans.  I really like this product.  So here is yet another in a long, and I mean very long, line of card blogger Archives posts.

First off, I am a sucker for retro sets.  I don't know why.  Maybe it's because I know I probably won't be able to afford the real thing so getting something that looks old but isn't must satisfy some intrinsic need.  Generally when a retro themed set is released in hockey, I will dump hundreds or more in it trying to complete the set as they usually look quite good in binders (see Champs Hockey, Parkhurst Champions, UD Retro). 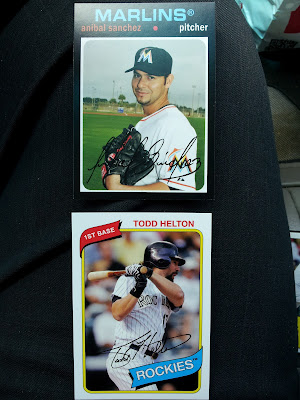 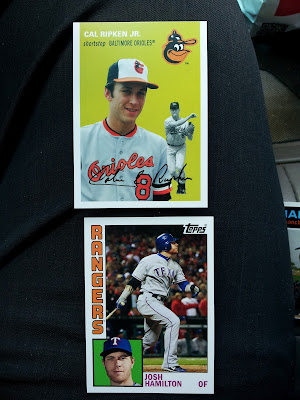 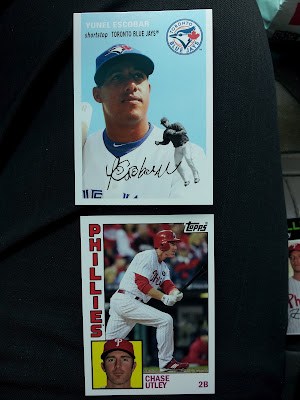 Second, there are quite a few designs that are thrown into this product making it as manically frustrating for design enthusiasts as it is wonderfully unique to set collectors.  The first 50 cards (1-50) feature the 1954 Topps base card design.  The player selection is also smattered with old school guys like Jackie Robinson, Mickey Mantle, and Cal Ripken Jr.  The second 50 (51-100) are from the 1971 set, you know the all black border cards that are extremely condition sensitive?  These have guys like Lou Gehrig, Phil Rizzuto, and Ty Cobb mixed with Chipper Jones.  The third group of 50 (101-150) are from the 1980 set.  I can't say that I am a big fan of the 1980 design by any means but it is definitely an iconic 1980s set.  The original 1980 Topps set featured the Rickey Henderson Rookie, the Jesse Orosco/Mike Scott Rookie, and I think the Rick Sutcliffe rookie card.  The Archives version has the rookie card of Yu Darvish.  The next 50 (151-200) use the 1984 design.  That's the set with Darryl Strawberry and Don Mattingly rookies as well as a host of others.  I think I like this design the best because of it looks very similar to the hockey set from the same year only with squares for the players heads instead of circles.  It's a neatly positioned and uniform design pattern. 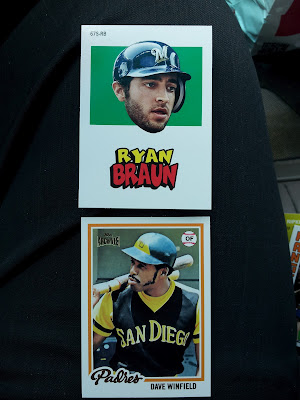 Thirdly, Topps still brought out what they are calling Fan Favorites and these are cards 201-240 and feature short printed cards of various players through history from various years, almost like a reprint.  Card 241 is also short printed but that's the Bryce Harper rookie.  Some of the players included here are Don Mattingly, Andy Van Slyke on his 1988 card, Wally Joyner on his 1987 card, and Will Clark on a pseudo-1986 card.  Somehow on these (inserted about 1:4 packs) I ended up with 2 Cecil Cooper #219s.  Weird.  There are also autograph versions of all of these which look awesome and they fall about 1:12 in the hobby boxes.  For some reason, Topps paid tribute to the ultimate utility man Jose Oquendo by giving him nine different auto versions, one in each position.

Fourth, I love the autographed framed mini set.  These are a tough pull at only 25 of each player but they look great.  Just like the mini GU or Auto framed cards in A&G, these too have the card encapsulated in a larger, see through frame.  I have seen the Nolan Ryan and the Ryne Sandberg ones in person and they are awesome.  I also saw a picture of someone who pulled a Reggie Jackson.  That one was sweet as well. 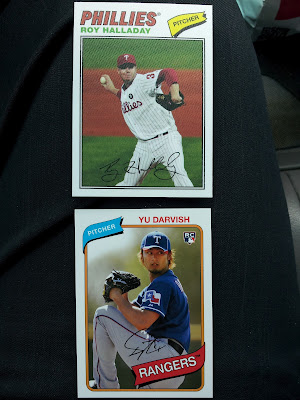 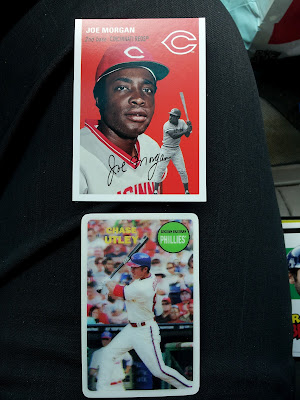 Finally, there are two different kinds of stickers and a 3D card insert.  The first stickers are the 1977 Cloth stickers.  There are 25 of these that fall about 1:6 hobby packs.  They feature a mix of current and former stars.  They are just what you think.  Cloth.  Just like the logo and trophy stickers from the Topps Sticker Albums (or even the Panini ones too).  The other stickers are the 1967 "floating head" stickers.  These also have a mix of current and formers stars but are less frequent at 1:8 packs.  The 3D cards are just awesome.  I used to have a bunch of these when I first started collecting but they have since gone AWOL.  I wish I knew where.  These look pretty close to the real thing and feature current players along with Babe Ruth, Willie Mays, Roberto Clemente, Mickey Mantle, and Al Kaline. 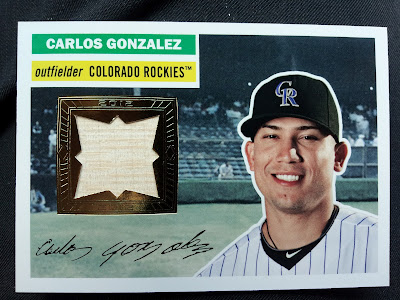 Oh, and for good measure...they even threw in a GU card.  Not bad for a blaster.
This Post Brought To You By TheRealDFG at 7:00 PM