This is a long one so bear with me.

2002-03.  It was an innocent time back then.  Wait a minute...no it wasn't.  That was a year after the terrorist attacks on the Twin Towers, the nation was gripped by war, there were terrorists threats almost daily, and we lived in a world where we didn't know if it was an orange day or a yellow day.  That was also a time where I was not very interested in card collecting but more interesting in bottle collecting (as in beer).

At any rate, my new acquisitions lately for recent products have been accompanied by older products from that early 2000's era where I wasn't actively involved in the hobby.  I have been piggybacking my orders for the latest 2011-12 product with boxes from this forgotten era and my most recent pick-up was an interesting product from Upper Deck.

I acquired a 2002-03 Upper Deck Classic Portraits box.  This is somewhat of a forgotten set that doesn't get much air-play due to the apparent limited production of the product.  It's only a rumor, but I read that Upper Deck pulled the plug on this one before its final printing due to the lack of pre-orders by hobby dealers.  I don't know if that is true but that could explain why the base set with rookies has a book value of $250.  I know there is no one at Upper Deck that reads this blog but if you know anyone, shoot them that question and see what they say. 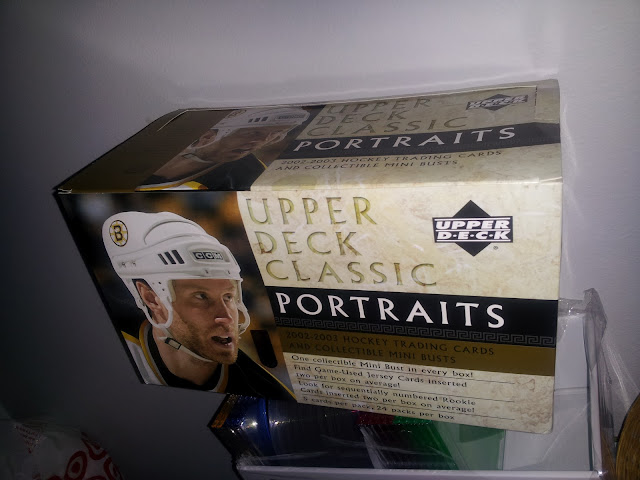 These boxes are huge in size (thats a 50 count box of CD Jewel Cases underneath for comparison).  This is because not only do you get a hobby box of the cards themselves but you get a "mini-bust" of any number of players from their extensive checklist.  From what I can tell, there were 17 subjects and a total of 125 different busts featuring players in their home, away, and alternate third sweaters as well as autographed versions, marble composite variations, and glass versions.  The autographed special variations were also limited printed between 25-50 copies.

My mini-bust was of this guy... 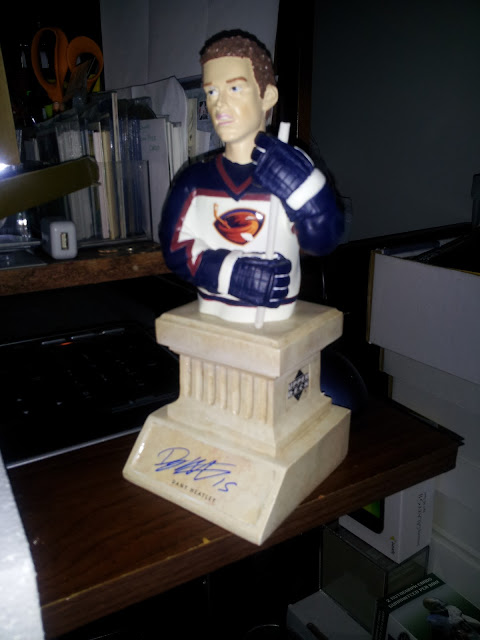 That would be Dany Heatley in his home Atlanta Thrashers sweater.  As you can see, this is the Autographed version too.  It isn't the serial numbered one but nonetheless, it is very nice.  I have only seen these for sale a few times and the retail price tags are in the $40-50 range for most of the autograph versions (unless of course you get a HOFer or soon to be one).  I can't see trying to collect all of these because a person would need a wing on their house just to display them.  It was bad enough trying to get the Penguin bobble heads out of the Pacific Head's Up set.  But, there is a Lemieux and a Jagr in the checklist that I wouldn't mind procuring at some point in time.  For now I'll just stick to cards. 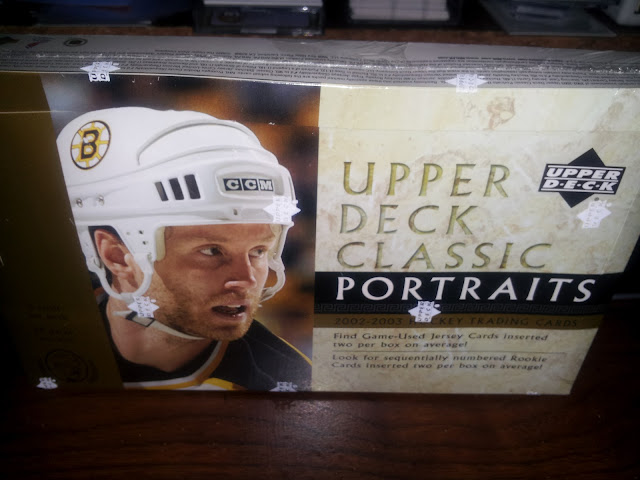 As for the box itself, it claims that there are an average of two Game Used cards as well as two sequentially numbered Rookie Cards.  There are 5 cards per pack with a total of 24 packs per box.  For the arithmetically challenged, that's 120 cards.  Since the base set is only 100 cards, one would think that there is a pretty good chance at getting the entire base set since I doubt there will be more than 20 inserts.  Of course, this is assuming that this was an Upper Deck set that had a collation with little to no duplication. 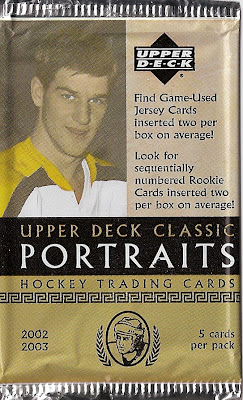 So here is what I pulled...

As you can see here, the box did yield me the full base set as well as a few doubles.  I also lucked out (if you can call it that) by getting 4 rookies instead of the standard 2 as stated on the box.  You can see Bobby Orr's smiling face on the pack which means he must be the focus of something in here, which he is.

Overall, the cards are very nicely designed.  They almost look like something from ITG.  The base cards have a zoomed in shot from an action stock photo that has been "portraitized" by the artists and their obvious talent for using Photoshop tools.  The backs feature that same photo only without the touch up, as well as a quick blurb about the player and a few years worth of stats.  The inserts are nicely designed as well and most feature some type of foil or mirror board printing.  I could have done better on the player selection for the inserts though.  I am happy with the product considering what it cost and I'm sure it is going to look nice in a binder.

Check out images of the product.

First the base cards. 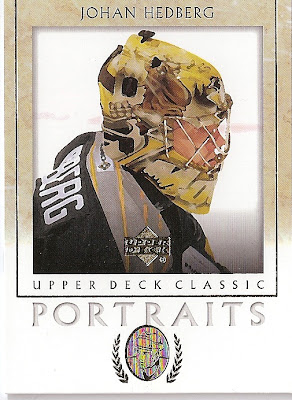 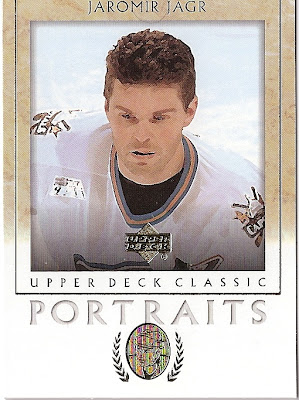 Moose Hedberg and Jaromir Jagr in his first year as a Capital.  As we all remember, Jags was traded for Kris Beech, Michal Sivek and Ross Lupaschuk or as I like to refer to them as some beads, a sack of wheat and a small pox infested blanket.  If you click on these to enlarge them, you can see the "portraitizing" that I talked about earlier. 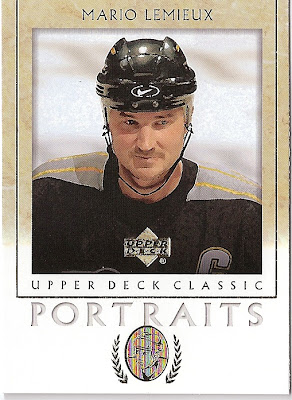 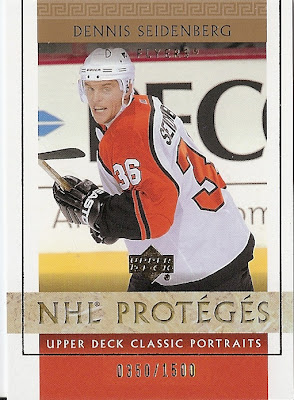 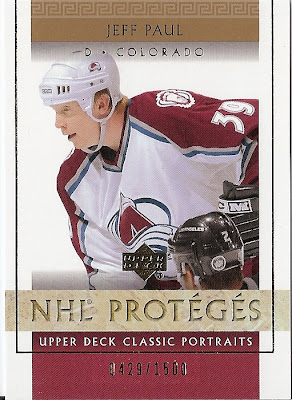 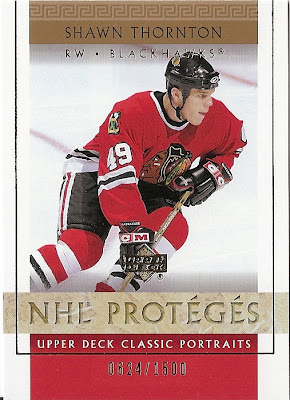 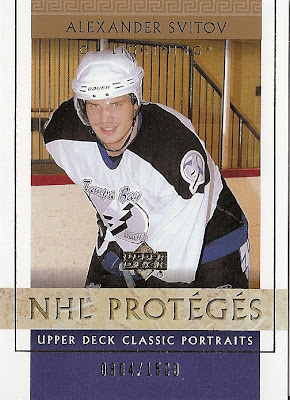 I received Dennis Seidenberg, Jeff Paul, Shawn Thornton, and Alex Svitov.  No one really to write home about because we only really have two NHLers here.  Jeff Paul only ever played 2 games for Colorado, otherwise he was a career minor leaguer.  Svitov was a high draft pick for the Lightning but in typical Tampa Bay fashion, they gave up on him quick.  Thornton and Seidenberg both are on the Bruins.  I didn't pull any of the big names like Zetterberg, Frolov, or Spezza, plus the Ryan Miller could only be pulled from Rookie Update as I mentioned earlier. 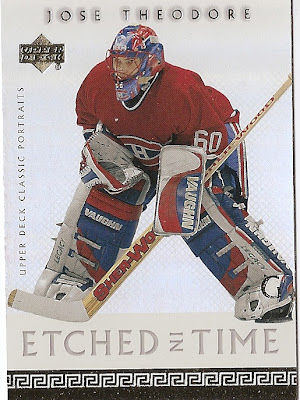 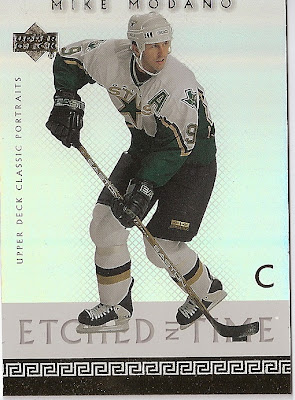 I pulled two cards from the Etched In Time set.  These feature a variety of players overtop a prismboard background.  The cards have a brief description of the player on the back as well as a list of events in the players career that were significant.  I pulled Jose Theodore and Mike Modano.  Sorry for the Modano scan that had his name chopped off. 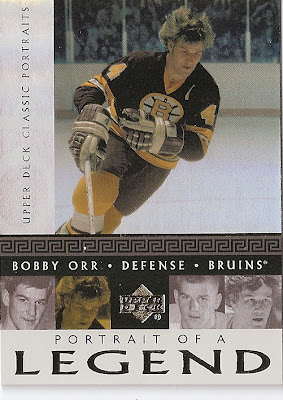 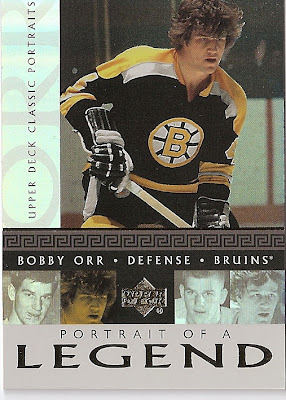 2 different Portrait Of A Legend cards featuring various achievements in the legendary career of Bobby Orr.  To highlight a little of the info on the backs of the cards...Orr won the Calder in 1967 and went on to score 120 points in 1969-70.  He was the first player in history to win four single season trophies..as well as a Cup.  His greatest season came in 1974-75 where he scored a career-high 46 goals en route to winning his second league scoring title.  He was also named to the All-Star first team for the 8th straight time. 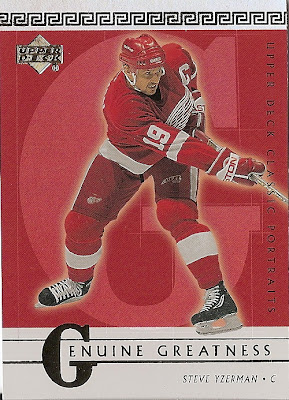 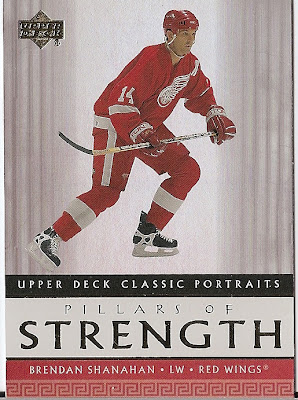 I also got two other inserts.  One is a Steve Yzerman Genuine Greatness card.  It features a few career highlights on the back side of the card.  The "G" in the background is some kind of red foil.  The other card is a Brendan Shanahan Pillars of Strength card.  These cards feature guys that can score but also mix it up with their physical play.  Once known for dishing out checks, he now collects them from players who focus too much on the physical play. 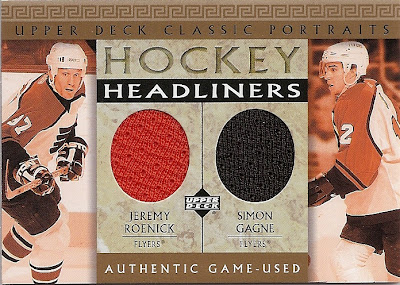 Very nice dual sweater card of Jeremy Roenick and Simon Gagne.  Back then, this was a great tandem in hockey.  Now, Roenick has a broadcasting job for NBC Sports and routinely spouts off verbal epithets in the direction of Mike Milbury and Keith Jones.  Gagne is on the Los Angeles Kings but, as has plagued his career, he was knocked out for the season with concussion issues.  Gagne is a deadly sniper on the wing but his history of injuries has derailed what could have been a perennial All-Star career. 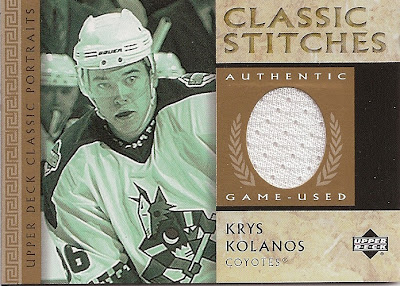 And I figured we'd go out with a bang.  Did I say bang?  I meant dud!!  This Krys Kolanos card had so much potential but then there is the dreaded white swatch of death.  Kolanos was a first round pick by the Coyotes in 2000 and his big break came in 2002.  He only made it half the season after Vaclav Varada blasted him from behind, knocking him unconscious.  He was on the shelf for a few months and then came back, beating Patrick Roy in overtime (pretty much his only career highlight).  Kolanos toiled in the minors for quite a few years, being used by teams mainly as an injury replacement.  He finally cracked a spot on Calgary this year and played fairly consistent.
This Post Brought To You By TheRealDFG at 6:22 PM