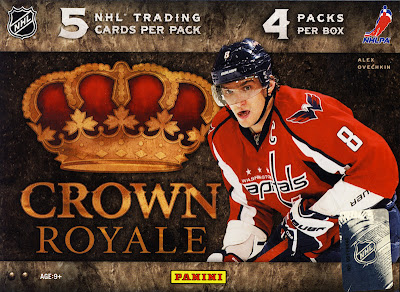 Crown Royale is back again this year in the arsenal of Panini hockey releases.  There have been breaks and reviews all over the blogosphere for the last couple months.  I was only fortunate enough to get a peak at my first box of this the other day when a nice package arrived on my front porch.

There is a mixed review on this product.  On one hand, it is almost priced out of the average collector's budget as boxes tend to hover around the $100 mark.  This is, of course, $100 for 20 cards (carry the 2...) which comes out at a whopping $5 per card.  There is also the fact that these are probably some of the gaudiest, most blatantly kitschy designs you will find in all of sports cards.  On the other hand, the boxes offer up four solid hits per box of either autos, memorabilia, or both.  Many of them are numbered under 100 and with the inclusion once again of the Rookie Silhouettes, there is a chance for some really big pulls.  And...where the crazy design turns off some groups, it is a draw just the same for others.

I'm one of the others because I've collected the previous years sets, I picked up last years, and I'm heading down that path again this year.  There is just something cool about that crown die-cut on the top of the cards.  Plus, for me, I did real well with boxes of this stuff last year and most of the 2011-12 breaks I have seen have yielded some very nice items.  So here goes 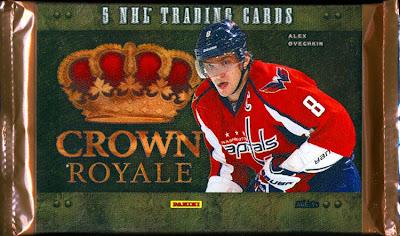 As I already mentioned, each hobby box contains 4 packs of 5 cards each for a total of 20 cards.  With each pack containing a "hit", that leaves 16 potential base cards or inserts.

Base cards are the typical Crown Royal design we have come to expect.  Silver foil crown die-cut into the top of the cards, with a player photo and some type of design to encompass the name and team.  This years took an interesting twist with the two year panels on either side.  I'm still not sure if I like those that way since they kind of detract from the card design.  It almost seems like there should be an additional die-cut where those panels are. 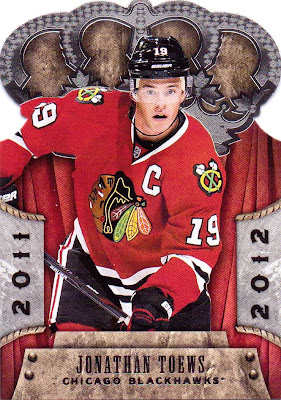 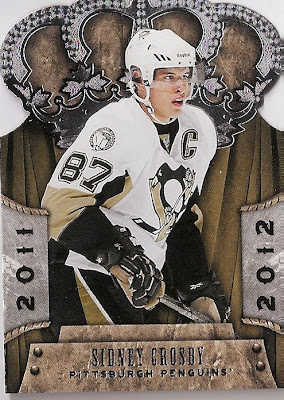 Here are a couple as an example.  Jonathan Toews and Sidney Crosby.  I'm not sure why these scanned different since they were done at the same time but they are the same nonetheless.  The base set numbering covers 1-100. 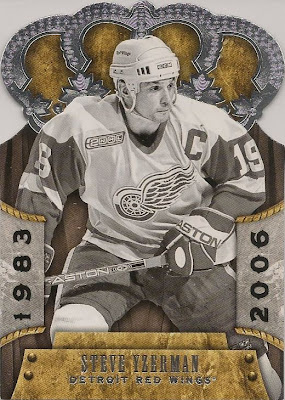 There are also Legendary Heroes cards.  These look similar to the base but the subject's photo is in black and white.  Also, the year panels feature the rookie season and the final season of play for the player.  Here we have Steve Yzerman.  These cards are 101-125 in the set and are not serial numbered any different than the regular base, however, they are listed as being short printed. 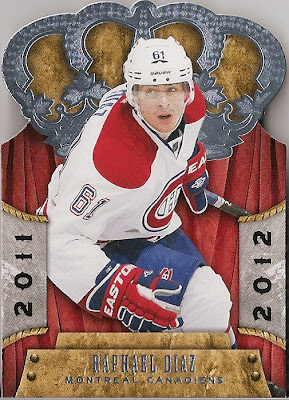 The next set of cards are the Rookie Royalty.  These are cards 126-140.  As the title suggests, these feature the years rookie class.  Based on the checklist, these are mostly considered the "Level 3" rookies.  The only difference separating them from the base is the blueish shade to the foil crown die-cut.  These also come in the autograph version as... 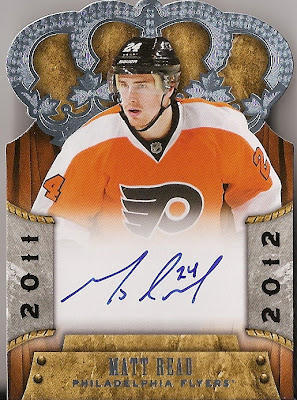 Rookie Royalty Signatures.  The signatures are on-card (as least most of what I have seen) including Mr. Matt Read here.  These are cards 141-165 in the set and feature all the "Level 2" prospects in this years' rookie class. 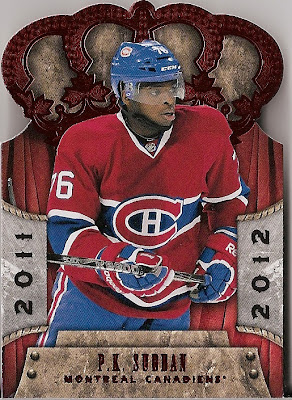 I also pulled a base parallel.  I wasn't aware that there was a parallel set considering all the other "chase" cards that were out there.  But, I guess it just wouldn't be a Panini set unless there was at least one type of parallel.  This years set features a RED version in addition to the main base cards.  These are not serial numbered as one would think. 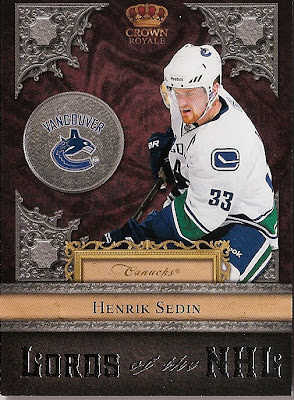 The first insert that I pulled was this Lords Of The NHL card of Henrik Sedin.  I'm not really a big fan of this design as the player kind of gets lost in the background design of the card.  If there was a design that was "too busy" for a card release, it had to be put into Crown Royale. 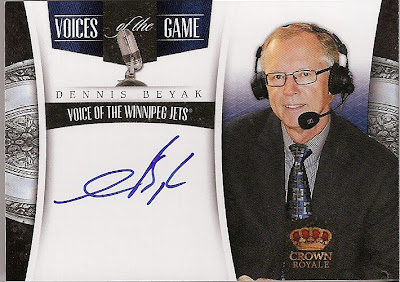 The next card was another autograph.  Here we have a Voices Of The Game auto of Dennis Beyak.  For those that aren't familiar with Mr. Beyak, he is the announcer for the Winnipeg Jets.  Dennis had been doing the radio side broadcast for Toronto since 1998 and was choice numero uno for the broadcast job in their inaugural return season to the NHL.  This is a very nice set included in Crown Royale, as it was last year too, and, by Ebay standards, is one of the more sought after insert sets of any of the years releases.  Just something about seeing the face behind the voice that we hear each an every night as we watch our beloved teams duke it out on the ice that draws out the popularity of this set.  There is also a more rare version of each of these that feature the announcers "catch phrase".  I'm still trying to complete last years set. 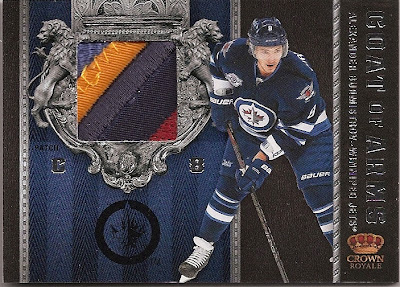 My first memorabilia hit was this fine specimen of a card.  Here we have a Coat Of Arms Patch card of Alexander Burmistrov of, yes you guessed it, the Winnipeg Jets.  As you can tell, there are 4 colors present, possibly 5 depending on how you count the larger dark blue stitch down the center.  If you click on the card, you can see in the bottom left hand side of the relic window it says PATCH.  I'm 99.9998% sure this is from the center embroidered patch from his Atlanta Thrashers jersey.  It would appear as though it came from somewhere on the left side of the patch along the shooting wing of the Thrasher.  That's the only spot where there is red near the blue border.  Regardless of where it came from, this is a very nice piece.

And the last hit, but by far not the least... 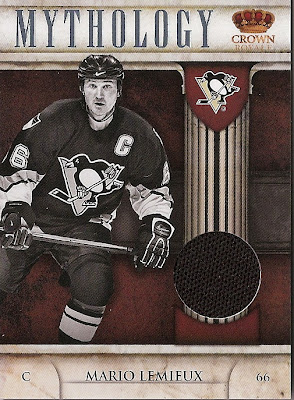 We have this fine piece of work known as the Crown Royale Mythology Memorabilia card of Le Magnifique himself, Mario Lemieux.  As are the Legendary Heroes cards, these also feature the player in black and white.  Plus, the design here isn't as busy and detracting from the card itself.  The only thing that would have made this hit better was if it looked like that Burmistrov card up there with multiple colors.  But a GU pull of the greatest player ever, who just so happens to represent my favorite team, and just so happens to be a founding member of my PC makes this box more than worth it to me.
This Post Brought To You By TheRealDFG at 2:13 PM