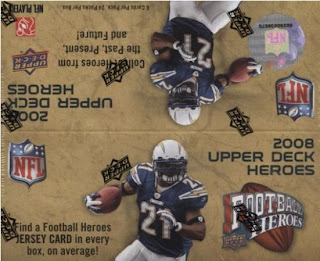 But that's ok.  I found this in one of those discount shelves in the card aisle and it was "heavily discounted".  Did you ever peel the stickers off these things?  They mark them up before they mark them down.  Gotta love retail. 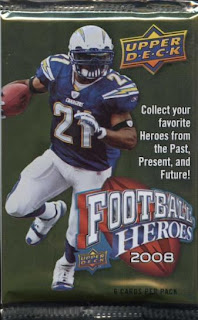 At any rate, we have a nice little retail box 2008 Upper Deck "Heroes" Football.  Since I'm rarely on the football card tip, I figured this would be a nice change of pace since the last thing I need is more 11/12 Upper Deck, 11/12 Pinnacle, or 11/12 O-Pee-Chee...well maybe not OPC because there are so many inserts/parallels/non-base cards in those that it's been impossible to make a dent in this one.  Plus, going through my football, I noticed I don't really have many of these that I could find other than a few Steelers in the PC.

The set contains 2-4 different cards of each of its subjects including current (at the time) veterans, rookies, legends, and some interesting cards in the mix.  The last 25 cards feature track & field "heroes", olympic "heroes", and (why not?) guitar "heroes".  There are a total of 266 cards in the set and according to the master checklist, there are a few groups of numbers missing from the checklist.  In fact 261-263 are just non existent.  Not sure why other than they couldn't get the planned subject on board in time to produce the cards.  I just wonder who it was?

At any rate, let's show what was in this thing...

First, here are some of the base cards.  As you can see there are variations on the same subject matter.  Each player featured has 3 regular cards in varying poses and a 4th "checklist" which features some type of artist rendering of that player.  Here we have Fast Willie Parker, former Steeler running back and all around nice guy. 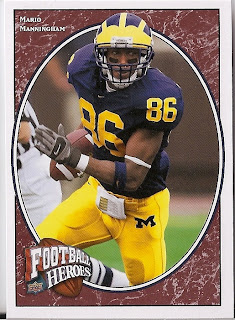 I figured with his awesome catch in the Super Bowl, why not show some love to Super Mario here.  This is an example of the Rookie Heroes cards.  These feature the various players from the rookie class of 2008 in their college uniforms.  There are also two different cards for each of these players featured. 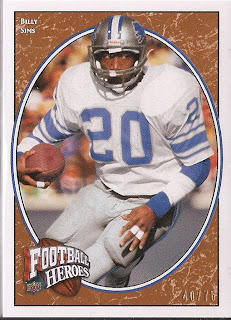 Here are three of what surprised me.  These are Guitar Heroes...surprising that the makers of Guitar Hero didn't sue Upper Deck.  There are four subjects chosen for this small subset including Tom Morello, Tony Iommi, Steve Vai, and Justin Hayward.  For those who may not know these guys...Morello was/is the lead guitar player for Rage Against the Machine.  He also played with Audioslave and has a number of side projects.

Tony Iommi for anyone that has lived under a rock their whole lives, virtually invented the heavy metal guitar riff.  He is the father of metal, period.  Tony is one of the original founding members of Black Sabbath and has also done various solo projects and side projects to boot.

Steve Vai, I don't even know where to begin.  He is considered by many to be near the top of a short list of the greatest guitar players of all time.  It would be hard not to agree with that too.  Vai has toured with many bands including Whitesnake, Alcatrazz, David Lee Roth, and Frank Zappa.  I could go on and on but I won't.  Look it up.

The other guy, who I didn't scan, is Justin Hayward.  At first I thought that it was pretty cool that they also threw in the singer/guitar player/writer of all the songs for the Moody Blues...assuming there were a whole bunch of guitar players in the set.  When I finally looked up the checklist, I was shocked to see that these were the only four included.  Now I couldn't figure out why he was in there.  Nothing against him or anything but come on?  Joe Satriani (Steve Vai's guitar teacher by the way), Eddie Van Halen, Eric Clapton, Hendrix, BB King, Jeff Beck, Pete Townshend, Jimmy Page, Stevie Ray Vaughn, Brian May...I could go on forever here and still not come up with Justin Hayward (again, no offense).

Well as you can see I got off track there a little bit.  One of my other "passions" is music.  I am what friends and family call obsessed with it.  I always have been.  I even considered starting a music blog well before this one but I don't even have time to keep this one up to date, let alone another one.  So anyway, where were we.  Oh, yes, the rest of the cards. 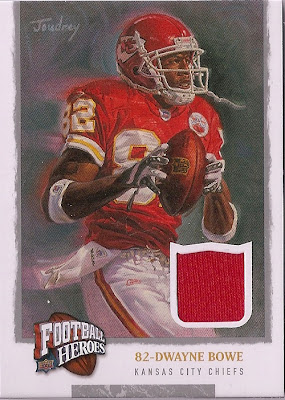 Really the last thing to speak of in the box was this GU relic of Kansas City Chiefs wide receiver Dwayne Bowe.  I guess each player has a relic card as well as an auto too.  A master set of this would simply be impossible to put together.

Overall, I really like these for some reason.  For one, they were inexpensive but don't really look cheaply made.  With Score, you can see they are cheap, same with Victory or MVP in Hockey.  But these are nicely put together, have nice designs, good photography, and give you a nice bit of information on the backs of each card.  I also like the artist cards because I am kind of a sucker for those for some reason.  I'd consider another one of these if I could find one as cheap as this one.  It would have been nice to see a few more serial numbered cards or another GU but I shouldn't expect anything more from retail.
This Post Brought To You By TheRealDFG at 8:59 PM

Email ThisBlogThis!Share to TwitterShare to FacebookShare to Pinterest
Labels: 2008 upper deck football heroes, Box break, for the love of music