This is another post that was sitting in the unpublished draft graveyard just waiting for the day it would be found again.  I guess today is that day.  It's only 5 months late.  I decided to try and get caught up on all the posts that I started and never finished.  This could take a while.

This is another box from Atlanta Sports Cards that I picked up at the National show on the 6th of August.  Once again, this was a set that fell into the time frame where the last thing on my mind was card collecting. 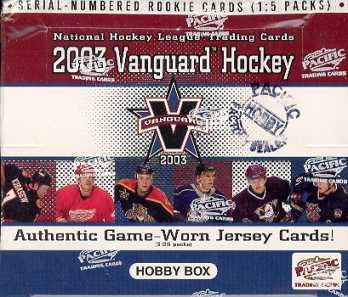 Features of the set include a base set with 100 cards as well as 36 rookies that are all serial-numbered, most out of 1650.  Rookie cards of Mike Cammalleri, Steve Ott, Jay Bouwmeester, and Ryan Miller can be found in this set.  In addition, there are Pacific Complete cards inserted 1 per pack.  Pacific Complete was a monster sized set (600 cards) that was broken up and inserted into each of the six major Pacific releases that year.  100 cards from the set are randomly inserted in Vanguard, those numbered 201-300.  While the set itself doesn't have a ton of value, the more rare "Red" parallel versions can be found at almost 10x the value of the regular base cards.


There is also a Vanguard LTD variation of all 136 base cards.  These cards are the same as the base versions with the words "Vanguard LTD" watermarked in a silvery stripe across the fronts of the cards.  They are also all serial-numbered out of 450.

The game used cards fall at approximately 3 per box with an opportunity to pull the gold versions which are numbered to 50.  The GU themselves are serial numbered too but the numbers vary depending on the player.  There are 50 cards total in that set.

As for the rest of the inserts, there is an East Meets West set which features, you guessed it, an Eastern Conference star paired up with a Western Conference star.  These usually come 2 per box.  There are also V-Team and In Focus cards that fall about 1 per box.  The V-Teams in particular have #'s 1-6 in the Hobby Packs, #7-12 in the Retail version.

Prime Prospects is a 20 card insert set that falls about 3-4 per box and features some of the bigger young stars in the making (at least at the time because in hind sight, the checklist is brutal).  Finally, my favorite insert set in this release features our goalie friends, called Stonewallers.  These cards show a brick wall with a silver foil center and the player overlayed on top.  They actually look really nice in person.  You can also find 3-4 of these in a box as well.

The base cards are printed using the foil-board that was prevalent in releases between 2001-2004 and has a mirror finish.  The Players name is printed vertically down the right side of the card in the team colors.  There is also a stripe directly to the left that features the product logo, very small at the top, and the players team and position.  The interesting thing is the way it is phrased.  Instead of listing the typical letter designation for position or even spelling it out, the cards say, for example, "Center For The Montreal Canadiens" (that's on the Saku Koivu card).  It's something different.  The rest of the card has the player cropped out of an action shot on top of the mirror foil with a team colored pattern design.

Here are some of the highlights to the box. 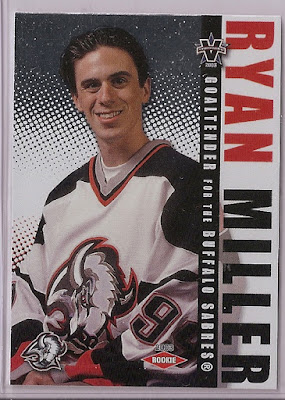 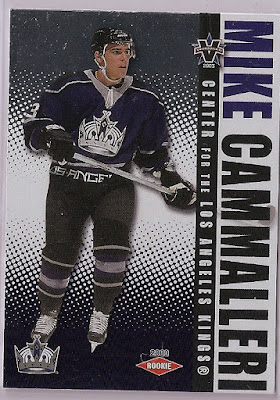 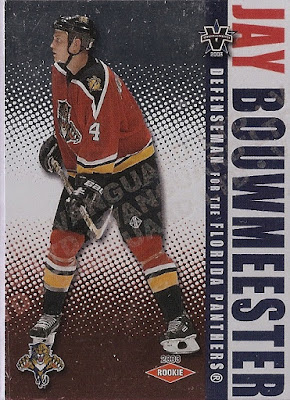 Jay Bouwmeester LTD Rookie.  You can kind of see the "Vanguard LTD" symbol going across the middle.

Here were my lackluster Game Used cards.  That's why I made them so small because they are kind of embarrassing.  The best one here, numbering wise is the Klesla card out of 50.  They are all small swatches, they are all white, and they are all from players that have little to no interest to me or anyone else on planet Earth. 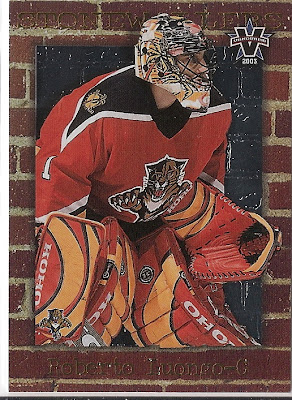 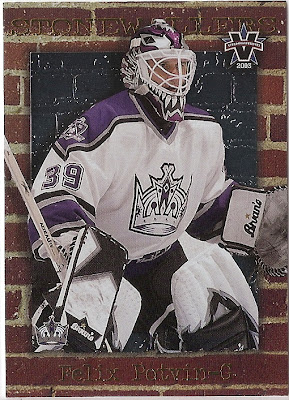 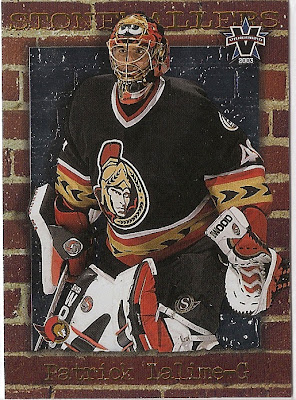 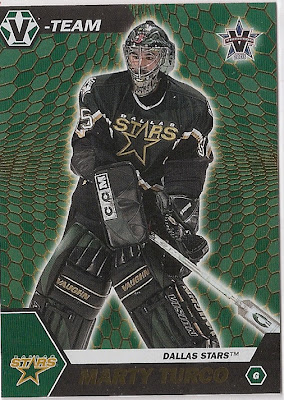 The Stonewallers, as I said already, are my favorites in this set.  I pulled Luongo, Potvin, and Patrick Lalime.  I remember when he debuted for the Pens way back when.  He was unstoppable then.  Also, I pulled one V-Team of Marty Turco.  I seem to always pull some kind of Turco insert. 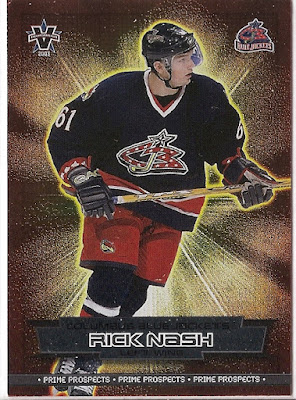 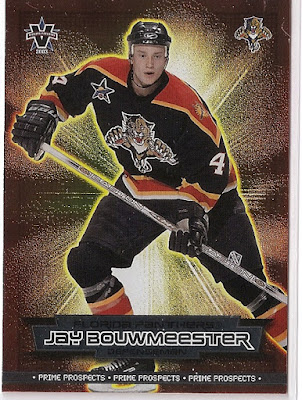 There were two Prime Prospects inserts in this box.  I pulled Rick Nash and Jay Bouwmeester.  These aren't too bad to look at either but again, these are two of the better cards on the checklist. 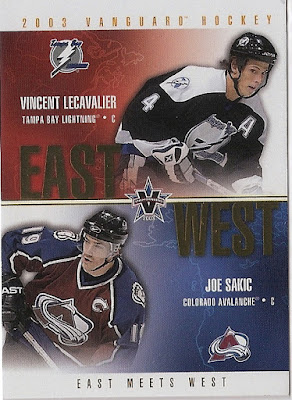 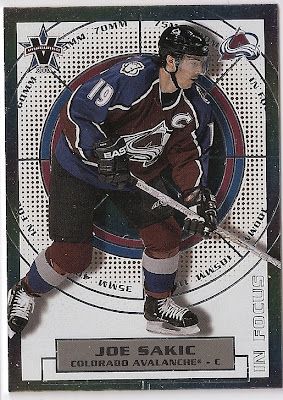 Finally, I pulled one East/West card of Vinny Lecavalier and Joe Sakic, as well as one In Focus also of Mr. Sakic.
Overall, this was a good pick up for the price tag.  You get a bunch of nice looking inserts, a few GU that you will probably wish you hadn't, and a chance at some nice rookie cards.  It was a fun break to do as well and I wish I would have gotten it on video but as most of you already know, my video skills are non existent.  If you do pick one up, just be careful with the cards because all that foil has a tendency to stick to itself after almost 10 years trapped in a pack.
This Post Brought To You By TheRealDFG at 9:45 PM