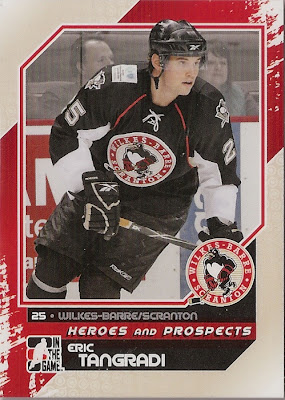 I think I have decided to make it official.  All this despite the fact that he was unable to secure a roster spot this year and the fact that this was the second year in a row where he was unable to do so.  Of course I am speaking of Penguins prospect Eric Tangradi.  He is so close to making the team it is sick.  He is going to have a few shots this year as his size and mobility around the boards makes him an excellent injury fill in.  I just hope he can make the best of them without injury.

So far this year he has one point on an assist for WBS.  That will inevitably increase as the 6'4" 225lb forward can not only bang down low but has a pretty good wrist shot.  We will of course see.

At any rate, I have added him to the side panel along with some scans of the collection thus far.  Positives...he only has about a 130 cards at this point.  Negatives...most of them are either autos, memorabilia, or 1/1s.  If you have anything that I may not have scanned in, let me know and we can trade.  Or as has become customary, you send it to me and then 8 months from now when you have forgotten, I return the favor.  (just kidding, partially).
This Post Brought To You By dogfacedgremlin at 7:14 PM