I already have a ton of these and am down to three cards for a complete base set.  As for the Rated Rookies, well that's another story.  But the point is, I need more Donruss like I need a hole in the head.

Well I'm starting to think I have a hole in my head.  I just couldn't help myself.  I have already hit my Du-Point on Upper Deck and O-Pee-Chee and since the only other hockey on the shelf at the store was Certified, Donruss won out on the "calling my name" war.  In case you were wondering what's Du-Point...that's the temperature where water vapor condenses into water or in my case, the point in time when every box/pack/blaster etc. that I open is filled with nothing but duplicates and crap.  I don't know if I invented the term but I like the way it sounds.

So again, to recap.  I have a load of these now so if anyone else is collecting the base, let me know what you need and I may have it.  But hindsight is always 20/20 and I am glad I picked this one up.  The first reason is that I generally use the box logos to "decorate" the plain cardboard boxes that the larger sets are housed in.  It mixes it up from the standard sharpie writing that is usually found on these.  Since everything I had obtained up to this point was from rack packs, I had nothing to adhere to the box.  Second reason...this: 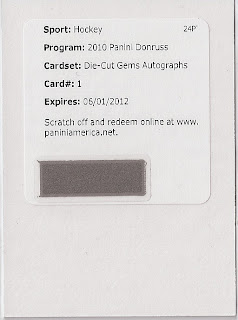 In case you may not be able to see the scan, this is a Die-Cut Gems Autograph redemption.  Why is this exciting?  These are supposed to be case hits.  Case hits in hobby boxes.  1 per case.  Did I mention this is a case hit?  I didn't know cases also included retail blasters.  I'm not complaining though.  Off to the interwebs to find out who exactly is Card #1 in this set is.

I already knew who it was in the regular base set but wasn't sure on the autos.  The Die Cut Gems Auto's are supposed to be numbered /25 and according to Panini's website (which I have been on way too much lately) there are 140 (maybe 141 if I miscounted) autos available. So my thoughts were confirmed.  This was a redemption for the true Great 8, the future Hall of Famer (in my opinion), The Finnish Flash...Teemu Selanne.

I haven't decided what I want to do with this one yet.  I checked Ebay for sales on the Die-Cut autos and it is a mixed bag on the finished auctions.  They have some that have gone for as little as $.99 and others that have pulled upward of $27 (Mike Modano) to $33 (Jonathan Toews).  My other option would be to scratch it and redeem it.  A Selanne autograph would be a very cool addition to the collection.  Although, I could use a few bucks in the PP account.  What to do, what to do?

At this point, it would be a little anti-climactic to talk about anything else that might have been in the box but since I committed to the break, I'll finish.  We have all already seen our fair share of the base cards.  Here are some now: 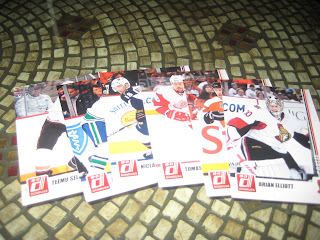 The rest of the box was typical of a normal retail blaster.  There are only 8 packs per box with 10 cards per pack (80 cards for the numerically declined).  The non-base cards come in about 1:2 packs.  I pulled 1 Rated Rookie and 3 inserts.  Here they are: 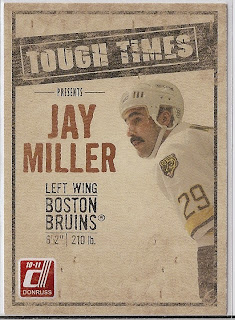 Jay Miller - Tough Times
This is a 10 card set that features players known for their "extra grit" on the ice.  Also available in autographed version.  Most collector's seem to want this set so traders should be hard to come by.  I think I have only 3 or 4 so far. 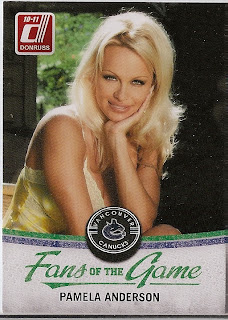 Pamela Anderson - Fans Of The Game
Another subset that I really see no need for.  I can't complain about this one but the purpose and idea of the set is kind of lame.  It's only 5 cards and can also be found in the autograph form.  Apparently Pam is a Canucks fan but that's to be expected since she is from B.C.  I have Willa Ford too from another pile I obtained at some point.  I don't know if she counts as a fan since she's married to a hockey player.  I'm still happy I have not obtained a Bieber.  Very happy.  If I get one, it gets burned. 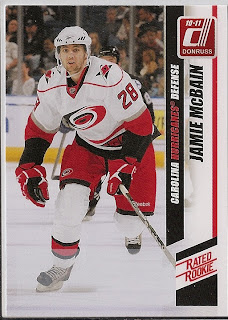 Jamie McBain - Rated Rookie
The "other" Hurricane rookie.  I'm not doing to well with any of the top 10-12 guys in this year's rookie class.  Maybe my luck will change soon.  There are 50 of these and unless you plan on picking up hobby boxes, good luck finding them from busting wax.  At one per blaster, you will need another mortgage on your house to afford them.  I'll get them eventually. 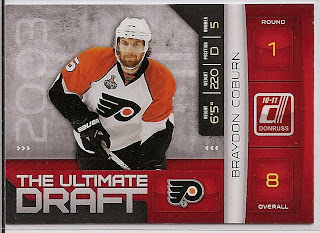 Braydon Coburn - The Ultimate Draft
Everyone hates these cards but I kind of like them.  It is sort of a rip-off of Upper Deck's Draft Day Gem set from last year but the design of these with the stats on the front and the color combination just seem to work for me.  I know, that's amazing considering my hate/hate relationship with Panini.

Again, if anyone needs some base for a set or two, let me know and I can check my piles.
This Post Brought To You By TheRealDFG at 10:58 PM