A package came today. Not just any package but the first pseudo trade package of 2011. I know there are many of you out there on your 100th or more trade of the year already but I have been stuck organizing, sorting, rifling, whatever verb you would like to use, to describe the task of going through 1 million cards. There hasn't been much time to look at trade lists and get things moving.

But no longer, I say. I need to get on the stick and start doing what makes this hobby survive...trade. So with that said, my good buddy Nick decided to strike first with a "small" package of items to help my set needs. 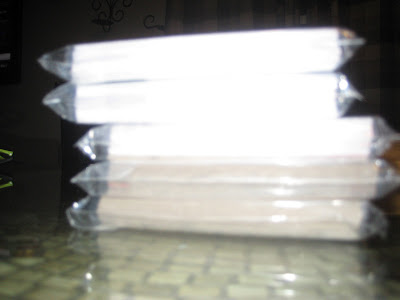 Rather than scan the cards, I'm starting to think that pictures and video might be the way to go, especially with larger lots and card.  But I digress.  Here is the stack of cards that fell from the confines of the yellow envelope they arrived in.  If anyone has ever traded with Nick, you will know that he takes great care in packaging the cards, each one in a penny sleeve, encased in a team bag, and usually sandwiched between some stiff cardboard.  Sure it may take longer and cost more to ship but as a collector, you can appreciate the care taken to keep the cards from damage.  I can't count how many times I received an Ebay package from a non-collector with less than stellar packaging.

So what was in the package, you ask?  I'll show you. 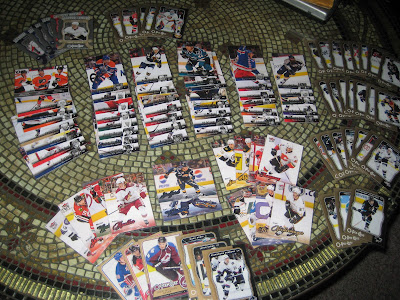 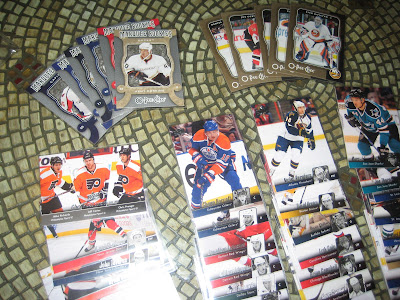 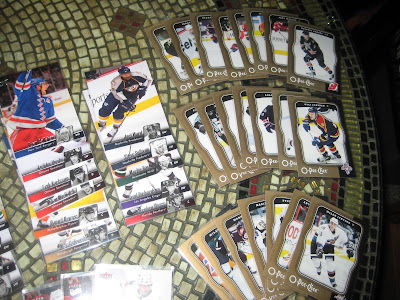 Starting with the 2010-11 Upper Deck, there were 42 (Dick Hoak) cards.  I needed 43 (Troy Polamalu) to complete my base set.  I now only need card number 105, which if you believe the checklist, should be Andrew Burnette.  If any of you readers out there have this little bugger floating around, let me know.  Series II should be out before we know it and there will be another 250 cards to hunt down.

Next we have 2008-09 Ultra.  There were 14 (Todd Blackledge) cards from this set in there.  My needs consisted of 22 (Duce Staley), thus...8 (Tommy Maddox) cards remain.  I have actually considered picking up another blaster of these since they are prevalent in most retail stores around my neck of the woods at the discounted status of $12.  Although, $12 for a small box of mostly doubles, triples, and quadruples may be the wrong way to go about this.

My needs for 2008-09 O-Pee-Chee are a bit more daunting.  I was 86 (Hines Ward) cards short when I woke up this morning.  I am now only 83 (Heath Miller) cards shy.  Colton Orr, Brian Gionta, and John-Michael Liles have now joined the biggest set of every card collecting year.

And last but not least, a couple of surprises that I wasn't expecting. 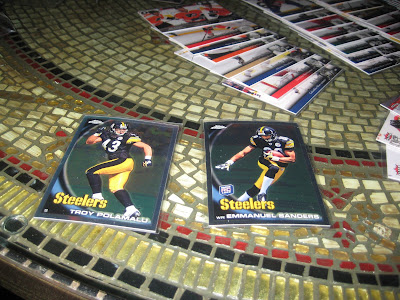 If you can't see, those would be the 2010 Topps Chrome versions of Troy Polamalu and rookie Emmanuel Sanders.  Everyone knows Polamalu is a stud but Sanders has proven himself worthy of a spot on the team as the #4 receiver.  Limas who?

Thanks, Nick for all the cards, the set help, and the Steelers.  I appreciate it a bunch and there will be something in it for you, don't worry.

Did anyone notice all the little weird things after a bunch of numbers in this post?  It seemed like every time I typed a one or two digit number, a name popped up.  Must be some new feature on blogger.  Weird.

Go Steelers!!
This Post Brought To You By TheRealDFG at 10:15 PM