The Streak Is Over 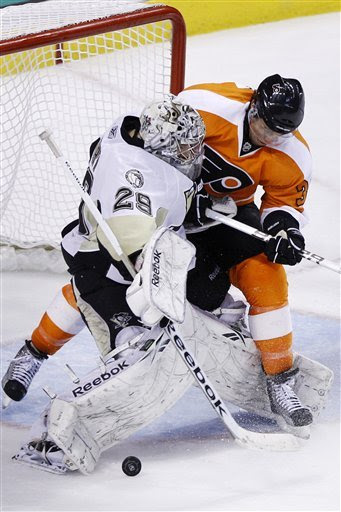 I knew it wasn't going to last forever but I was hoping at least until Christmas.  In case you were wondering, the Philadelphia F@#ers beat the Pens 3-2, snapping a 12 game win streak.  On a positive note, Crosby kept his 19 game point-scoring streak alive with 2 assists.  Geno, who had missed four games with a knee problem, made his presence known by putting in his 9th and 10th of the season.
The disturbing part for me though was that the Flyers outshot the Pens 37-23 and have now beat Pittsburgh 3 times this year.  I can't stand it when there is a team that dominates the Pens for a season (see the Devils last year).  With all their talent, there is no way that should happen...EVER!

Oh, and by the way...That IS!!!! Goalie Interference despite the [EXPLETIVE DELETED] announcers.

And that's all I have to say about that.
This Post Brought To You By dogfacedgremlin at 11:01 PM