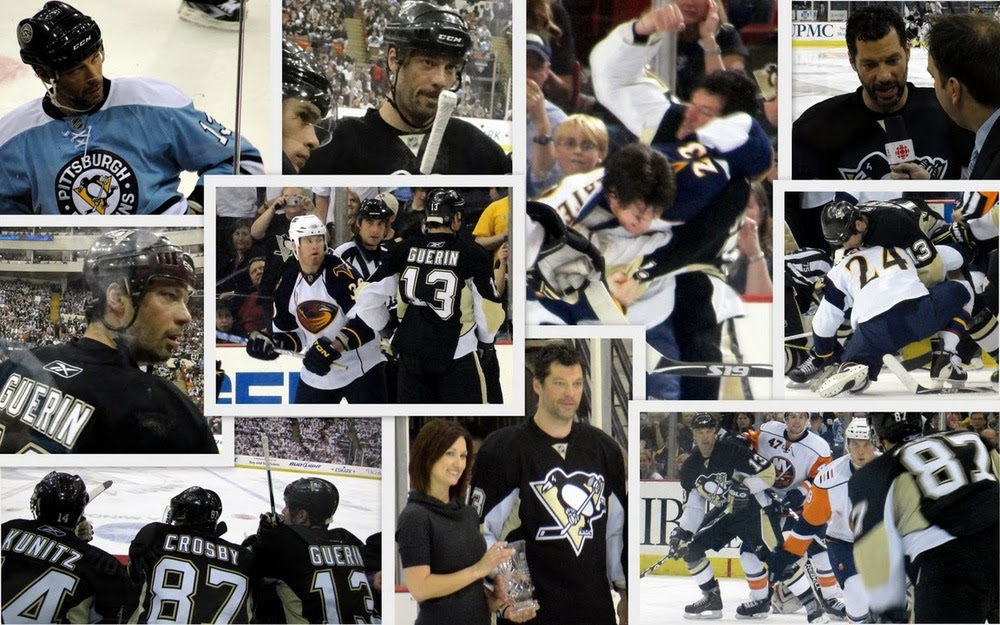 (This came from somewhere on SBNation Pittsburgh and I can only assume from Pensburgh since they are the only ones cool enough to do something like this.)
No more "My Dad Rocks, #13" signs in Pittsburgh.  The Penguins announced or at least, were rumored to have announced or....Okay, it is being reported (how's that?)...Nope, it's official.  Bill Guerin's services for the upcoming 2010-11 season are no longer needed.  I knew this was probably going to be the result for one of my all around favorite players and I think I saw the writing on the wall when they signed Arron Asham a few days ago.  Granted, Asham is more of a brawler by nature, or at least gets flagged as a bit on the "goonish" side but he has the skills to fill in as a top line winger.

The biggest point in bringing Guerin back was the salary cap.  There is no questioning his leadership and playmaking abilities.  There was never a question of his skill level or his on ice presence.  The only issue was the almighty dollar and in the end, that is what wins out.  With just over $59M to work with, the Pens were out of cap space after signing "high profile" D-men Michalek and Martin to replace the loss of Gonchar.  With only about $1.7M left, there wasn't much room for Billy G and his $2M contract.  Guerin already took a pay cut in order to stay with the team for the 2009-10 season and despite being vocal on the issue of staying in Pittsburgh for one more year, was understandibly not willing to take another cut to stay again this year.

So what do the Pens lose?  In his short, but meaningful time with the Penguins, Guerin brought the veteran leadership to the team that had been lacking up until the second half of the 2008-09 season.  The locker room was always a tense environment up until Terrible Therrien was fired and Guerin brought a little levity to the room which was just what the team needed.

Guerin put up 5 goals in 17 games after the trade deadline but his real contribution was in the playoffs.  Playing on the top line with Crosby, he was able to help propel the team through the playoffs, scoring seven goals and 15 points in 24 games.  11 of his 39 playoff goals game during his stay with the Pens and he now has another Cup to show for his efforts.  Career-wise, he is a +400 goal scorer in in 1,263 regular-season games.

At 39 years old, I don't think he is finished in the NHL.  There are still plenty of teams that could use his services.  The most widely speculated place for him to land seems to be Boston, where he played once before.  Wherever he goes, though, I will always be a fan.  I will also continue my quest for collecting every Billy G. card in existence (well at least one of each).  It is a daunting task, to say the least.

Thanks for the memories, Billy G.  Your services, your leadership, and your attitude toward the game will greatly be missed.

Video of Bill Guerin celebrating the Cup victory with his children.

This Post Brought To You By dogfacedgremlin at 1:53 PM