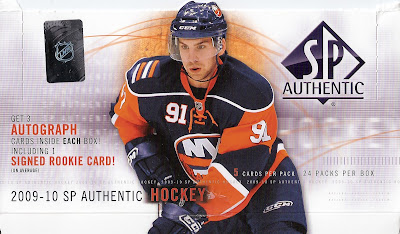 I know I am late to the party on this one but there really hasn't been much to get me excited about.  I had about a hour and a half to kill the other day while waiting for a client to show up to a meeting so I decided to pay a visit to my LCS.  I hadn't been there in well over a month because, well, like I said, there hasn't been much that has caused me to want to bust a box.  So since everyone (well not everyone but many of you) are going to the National this weekend, this was my chance at something cool/fun/wallet draining.

The shelves were riddled with new product in Baseball, Basketball, and Football.  But that is never why I am there.  I went straight for the hockey wall.  Pickin's were slim to say the least.  From the looks of it, he had replenished the wall with some older wax product from Upper Deck, including some 94-95 stuff, 97-98, 99-00, and a box or two of 05-06 which was priced out of my wallet capacities.  As for newer stuff, there was still plenty of this years flagship UD as well as Champs, Ultra, and a few tins of 2008 Sweet Spot.

My eye caught the boxes of SPA.  I told myself after the last two years of getting screwed out of hits and poor pack collation that I wasn't buying anymore SP, SPA, or SPx.  But, for some reason, the urge to bust a box came over me.  Maybe it was Tavares on the box cover that enticed me since finding product over the last three years that didn't have Crosby, Malkin, or Ovechkin has been few and far between (although Ice had Yzerman and Champs had a Dinosaur).  I have also, yet to pull a Tavares out of any 2009-10 product.  After chatting for a bit about new products, the National, and business in general, I grabbed some supplies and picked a fresh box of SPA off the shelf.

First up are some of the SP Essentials cards.  Basically these are a parallel version of the base cards that are serial numbered /1999 and have little boxes floating in the background.  I pulled... 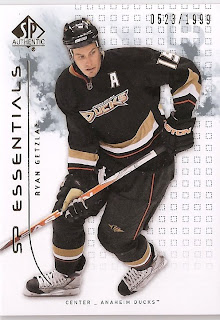 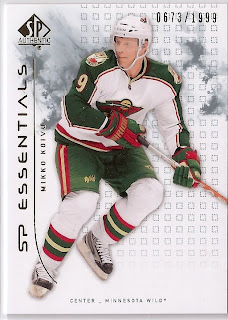 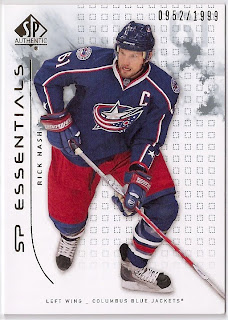 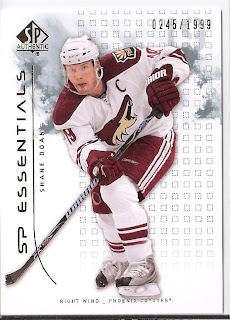 Ryan Getzlaf, Mikko Koivu, Rick Nash, Shane Doan
Next up are the return of the HoloFX cards.  These are the hologram laden cards that showcase the technology that Upper Deck became famous for.  I pulled... 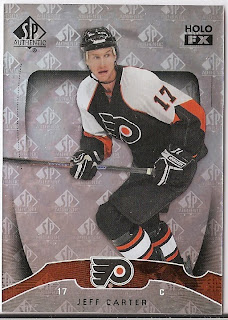 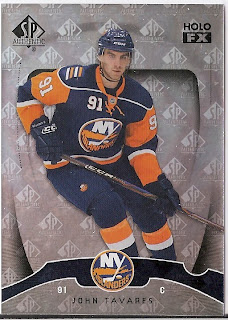 There it is.  My first Tavares pulled from a pack.  It must have been fate.  Plus the Jeff Carter is kind of cool. 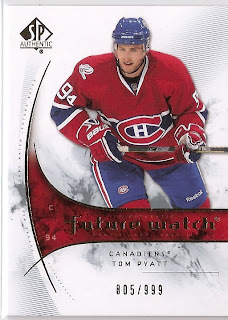 Finally, the autos.  Stated odds put the autos at approximately 3 per box.  Here is how I faired. 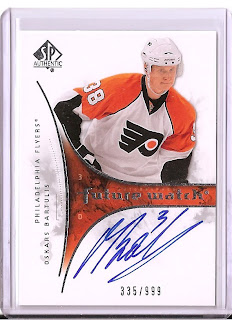 Oskars Bartulis 335/999. I could think of better cards but at least it is a player I have heard of. 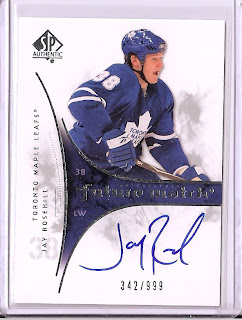 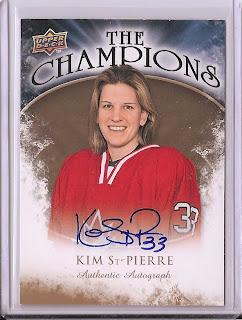 Kim St. Pierre Champions Auto.  Are you freakin' kidding me?  Another box of Upper Deck product that uses the Champions auto as a hit?  I thought it was a fluke that there was one of these in one of my Champs boxes.  When a pulled a second one in my box of Ice I laughed because of the irony.  Now I get a third?  At least she is a hockey player and not a figure skater.  And a goalie.  And a 5-time IIHF Women's Championship Gold Medalist.  And a 3-time Olympic Gold Medalist.  Okay I guess it could have been worse.  Actually I secretly love this card.

Finally...and I do mean FINALLY!!  I hit something worthwhile in a box of SP product.  It may not be the best card in the print run but I was kind of excited because of the level of talent on the card. 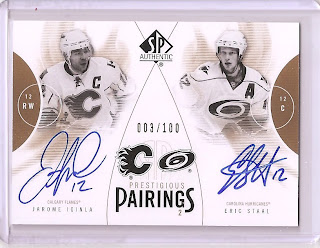 It is a SPA Prestigious Parings Jerome Iginla/Eric Staal Dual-Auto numbered 3/100.  This had to be one of the coolest cards I have ever pulled from SP, let alone from any pack.  I compare this to the Fedorov auto I pulled back in 98-99 Bowman's Best or the Eddie Johnston I pulled from ITG.  Best part...IT'S ON CARD!!

Take a moment and bask in it's glory.

Okay, take another moment.  What I want to know is does this count as 5 autos?  If not, I still ended up with 4 which was 1 more than the stated odds.  That makes up one on the missing hit from last years SP.  Now they just need to make good on the 2007 box that I was shorted and all will be right with the world again.
This Post Brought To You By TheRealDFG at 12:10 PM