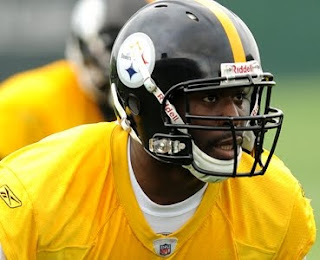 It is being reported that Jason Worilds has come to terms with his contract for the Pittsburgh Steelers.  Details haven't been released as of yet.  If, in fact, that is true, the Steelers will have signed all but one of their 2010 draft picks prior to the start of training camp.  That leaves only first round pick Maurkice Pouncey the only hold out.

For those that don't know (or care) Jason plays outside linebacker and was drafted in the second round out of Virginia Tech.  While in college, he was listed as a top defensive line player and racked up 14 sacks over three years.  That's not a staggering number by any means but when you consider the fact that throughout the games and offensive schemes he faced, he was double teamed about 85% of the time.

At the Combine back in February, Jason clocked the fastest 10-yard split among all pass rushers and topped that by putting up offensive back numbers at the Hokies' Pro Day.  He ran 4.47 and 4.54 40s and his 20 yard shuttle was an astonishing 4.07.

Little did he know at the time that he would become heir apparent to Deebo's throne (slight exaggeration).  Just like in years past, Jason will probably be put on special teams since that is where most rookies find their homes.  The key is making an impression with the time he gets.  If he has any semblance of a season like Woodley did his rookie year, there will be plenty of playing time for Jason in the future.  The Steelers just plain sucked on special teams coverage last year and becoming the flower in the rock garden should get him some defensive time.  I think having a player that can substitute for either Woodley or Harrison will come in handy down the stretch.

One left.  Anyone think he will sign before players report to camp tomorrow?
This Post Brought To You By dogfacedgremlin at 10:54 AM