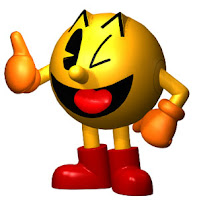 If you haven't guessed it, Pac-Man is celebrating it's 30th anniversary.  I can't believe that it has been that long since the little yellow guy burst onto the video game scene.

I don't really remember the early stages of Pac-Man's release since I was too young at the time.  However, I do remember getting to play the "sit-down" style arcade version every time we used to go and pick up a pizza.  The local pizza place where I grew up was called Mr. Munchies and they had two or three arcade consoles you could play while you waited.  My dad and I used to go and pick up the pizza and I would always get a few quarters to play.  They also had a Centipede game and Asteroids (which were later changed to Zaxon and Arkanoid).  Good times.

At any rate, back in 1980, Fleer released a set of Pac-Man stickers which accompanied a scratch-off ticket style rub-off game.  You were able to get 3 stickers, 3 rub-offs, and of course, a stick of everyone's favorite 3 second flavor burst gum.  I never had the priveledge of having any of these cards but I remember my cousin did.  The rub-off game was basically a Pac-Man game maze and you scratched off each space, creating your path.  You either had a power-pellet, a blue ghost, or a color ghost under each spot.

Apparently, after reading about these stickers, it appears there were at least 3 different color variants to the cards.  Th first were just plain, non-detailed pictures of Pac-Man with blue printed backs.  The second had more detailed fronts with blue printed backs.  The third had black backs with detailed front pictures.  I guess even in the early 80s, companies were trying to milk the parallel thing.

Fleer continued for the next couple years with subsequent Pac-Man releases as well as Ms. Pac-Man and Super Pac-Man sets.  You can still find these up for auction on the Bay or other auction sites but because of the item scarcity, most of the older, unopened boxes are going to cost you.  You can find the Ms. Pac-Man packs for about $1.50-$5.00 each and the Pac-Man cards run $4 and up.  Individual cards/stickers range in price. 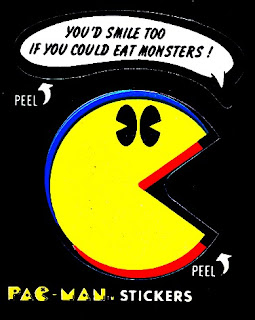 I wonder if there are any readers out there that have these in their collections.

Check out Google's homepage for a blast from the past as they pay homage to the original ghost buster.
This Post Brought To You By dogfacedgremlin at 11:19 AM