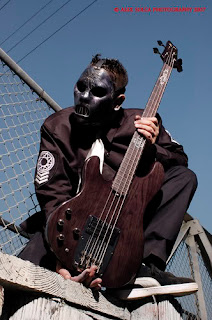 There is an old addage that deaths tend to occur in 3's.  I have never been big on superstitions and the like but in my own life, this has been pretty evident.  It seems it is no different in the Rock world either.  First Peter Steele, then Ronnie James Dio, now Paul Gray.
For those of you not familiar, Paul Gray, or #2 as he was known in the band, was the bass player for Slipknot.  Whether you were a fan or not of the music, there was no denying the fact that Paul was a phenomenal musician and bass player.
On Monday, Paul's body was found by an employee at the Towne Place Suites in Urbandale, Iowa.  Police have said there was no evidence of foul play but an autopsy would be performed along with toxicology testing.  At this point it is not sure if drugs were involved, considering Paul's unfortunate history of drug abuse.  He had been clean and sober for the last two years and was happily married with a child on the way (not sure if his kid was born yet).
I will never forget when I first heard Slipknot.  I had just graduated college and we had the bright idea that we should move to Las Vegas to get jobs.  After arriving there, I spent some time teaching in the Clark County School District.  On weekends (and weekdays for that matter) there was always something to do and some event going on.  A friend of mine and I always used to spend Friday afternoons at the CD store checking out all the "new releases".  I say that because we only ever bought from the used bins because you could get 4-5 for the price of one new.  They used to have a New Artist Listening Station set up where you could actually hear, for the most part, anything you asked them to put on.
While leafing through some of the new stuff, I came across this album with a bunch of guys in clown masks and bondage getups and, of course, had to have a listen.  Ever since I first saw KISS and Alice Cooper, the theatrical rock bands have always been some of my favorites.  The music sounded monstrously huge and like nothing I had ever heard before.  The percussion was loud, heavy and with enough bombast to blow your speakers.  I remember thinking, "Ahhh, no wonder they are so angry.  They are from Iowa."  And yet, the songs had melody, progression, and were not ridiculously over the top like some other metal bands at the time.  Once I heard them, I was a fan.
I had gotten to see Slipknot three times in my life as part of some festival shows and those were some of the craziest shows I have ever been to.  I was actually kind of excited to see when it was announced that Paul had joined the group HAIL, which consisted of Tim Ripper Owens, Dave Ellefson, Paul Bostaph and Andreas Kisser.  Paul was going to take Ellefson's spot since Dave rejoined Megadeth.  That lineup of metal superstars was sure to put out some killer music.  Unfortunately everyone will have to travel on without him.
The below video is part one of a series of videos called Behind the Artist. Paul explains how he got into music, became a bass player, and started the ball rolling on the formation of Slipknot.  You can find the other parts to the video on YouTube if you are interested.


RIP Paul, you will be missed.
This Post Brought To You By dogfacedgremlin at 11:07 AM