I was going to take some time out and provide some feedback on my opinions of last nights games and the shoddy coverage by VS.  Then I decided that I was going to focus a post around the inabilities for defenses to zero in on their primary purpose of preventing pucks on the net.  But after reading many of the sports-op articles this morning covering last nights games, I felt compelled to cover one of my favorite lost teams.

One of the first articles I read this morning came from the Ottawa Citizen written by Wayne Scanlan.  His piece was "Time Ticking Down On Senators Season After 7-4 Loss".  I always try to read the opposing teams local reporting just to get the proverbial "their side of the story".  Now one glaring error that I found in Mr. Scanlan's reporting was in his eloquent metaphorical comparison of Ottawa's play last night to that of the JOHNSTOWN Chiefs in Slapshot!.  You see, for those of you who haven't seen the movie, the Chiefs player personnel was built on the basis that the more aggressive and dirtier you play, the more butts will be in seats.  And of course, in typical Hollywood style, hilarity ensues....hold on a second...Anyone see the problem there?  JOHNSTOWN CHIEFS?  I believe that was the Charlestown Chiefs.**

The Johnstown Chiefs were in fact an ECHL team that played in Johnstown, PA from 1988 to 2010.  The franchise packed their bags on April 3 of this year and moved the team to Greenville, SC. 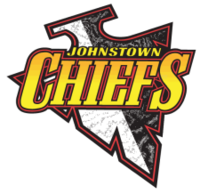 As some of you might already know, I grew up in a south eastern suburb outside of Pittsburgh.  When I was in 7th grade, our family moved closer to our extended family up in the Laural Highland mountains about 70 miles east of Pittsburgh.  We were only about a 45 minute drive up 219 from Johnstown.  As I got older I was able to attend quite a few Chiefs games at the Cambria County War Memorial.  Plus, being in the virtual "hillbilly country" that we were in, the local media, including WJAC (TV and Radio), The Tribune-Democrat (local newspaper), and WNTJ (AM radio) all covered their games.  Until we got cable, it was very hard to bring the Pens games in over the shoddy radio that I had in my bedroom and the games almost always got bumped for some outdoor fishing show on TV.  [keeping in mind this is before Fox Sports Pittsburgh and the internet and our living room TV had rabbit ears]
The Chiefs were formed in 1988 when Johnstown was granted a team in the ECHL.  They were going to be called the Johnstown Jets, the real team that the Charlestown Chiefs of the movie were based on, but the name couldn't be wrestled away from the previous owners.  The Chiefs name was one of those public "lets name the team" contests that was held in the area.  Because the majority of the film "Slapshot" was done at the War Memorial and the fiction team was loosely based on the previous team that existed their, the fans in the area took to the name and they became the Chiefs.  When I was a kid, I always thought that they were a farm team for the Penguins because of their colors (black, white, and gold) but in fact they provided young talent for the Boston Bruins (hence the colors) early on and later the Colorado Avalanche, Minnesota Wild, and Columbus Blue Jackets.
I still remember watching Scott Gordon play back in 87-88 before he moved up to Quebec.  I remember feeling good about the Olympics in 1992 because we had a goaltender that I had seen play so many times before.  Unfortunately, that was the year Ray LeBlanc went gangbusters and I don't think he ever saw the ice.  They eventually lost to the Unified Team and then to Czechoslovakia in the Bronze game.  But this post isn't about the Olympics.
The War Memorial isn't going totally silent though.  The Wheeling Nailers are planning about a dozen games there next year, I can only assume to lure some fans from Western PA.  The Chiefs team name, logo, records, and history are apparently staying with the city of Johnstown as well.  The ownership doesn't plan on letting the name die completely and is anticipating another team being formed in the near future.  For the sake of hockey in that area, I do to.
R.I.P. Johnstown Chiefs  (1988-2010...for now)
I was going to post some cards of current and former Chiefs players but I can't find them.  I used to have a player set from like 90 or 91 that had an awful yellow "peppermint" stripe border but I can't seem to find any of them.  I remember I had Perry Florio, Stan Reddick, and a couple other lesser known players (not that any normal fan of hockey would know who those guys were either).  I wonder what happened to those cards?
I had to add this...One of my favorite scenes of Slapshot the movie is the opening sequence.

UPDATE**That was what was originally reported in the feed that I got this morning.  However, if you check out the article now, the error has been corrected.  Too late!!  I saw it!  I swear I did.
This Post Brought To You By dogfacedgremlin at 9:17 PM