Ice Time and Some Trades 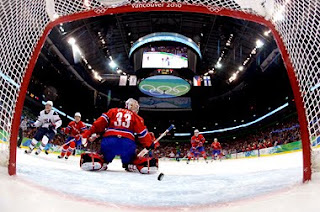 (Phil Kessel's goal against Norway, goal cam view)
I am going to do something a little different today.  Since the games are coming at an alarming rate and most of them are being played in the earlier parts of the day, I am missing out on the live action.  No one wants to read about someone watching highlights and simply regurgitating the score back to you like some Sportcenter reject.

Therefore, I am going to send you in this direction.  Joe Pelletier's Greatest Hockey Legends is an awesome site for any hockey fan or just the casual observer.  I think they do a great job of rehashing the Olympic coverage and rather than rework what has already been done, check out thier recap of yesterday's action.

I will say this:  Both the men's and women's US vs. Canada matchups are setting themselves up to be something of legend.  It is going to be awesome.  The men's game is on Sunday and the women's teams both have to get through Sweden and Finland first before the finals.  I've never been this jacked up about the Olympics before.  It's crazy!!


In trade related news, I just received a couple packages yesterday from some recent trades.  I think one is from the Great and Powerful Troll.  The other is from blog reader Michel.  Both are fasmatasmic!  I will post their stuff as soon as I can.
This Post Brought To You By dogfacedgremlin at 8:59 AM