So it was time for a trip to my LCS today because I knew that, by now, the latest shipment of product had to be in. Like most of the country, we got dumped on with snow here in the midwest (not as much as some). The normal shipment of "new stuff" hadn't come in the last time I was in there and plenty of time had past for it to finally arrive.

When I got there, it was a madhouse with kids all over the place. My LCS partners with the local boy scouts/girl scout/cub scout troops in the area and hosts collecting nights where they come in and learn about collecting and trade with each other. It is a great thing to get involved in the community, especially as a card shop owner. Plus, with any luck, 1 or 2 of those kids may become lifetime collectors.

But that's not what I am talking about right now. On the shelf were SPx, SP Authentic, more UD Series I which he had run out of before, ITG Heroes and Prospects, and Trilogy. I have been eyeballing and drooling over the Trilogy since it was released but haven't pulled the trigger. It seems this wasn't the night either because although I am a loyal customer, these were going for $200/box and $25/pack. We can get these online for between $130-140. Instead I went with the ITG and I was not disappointed.

I usually pick up at least one ITG product every year and this was the one I planned on adding to the collection. This years set has a new design for the base set (150 cards) featuring players from the CHL and AHL. They have also created two new 10 card subsets with CHL Rookies and AHL Rookies. So without further adieu, I give you my break. 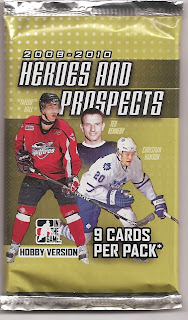 The Draft Redemptions are an interesting concept for those not familiar with the typical ITG promotions. Basically, you have a potential 2010 draft pick featured on the front of the card. Let's take Mr. Taylor Hall for instance. On the back there is a gold foil stamped number; in this case 15. If your player is picked in that number's position during the draft, you can redeem your card for a GU memorabilia card of that player numbered out of 10. Since Hall is probably going to go top 3, I think I'm out of luck on that one.

Here are the "Hits" (just for the record, I hate using that word) 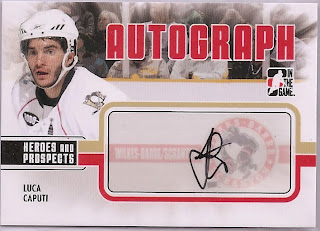 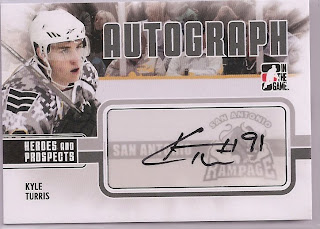 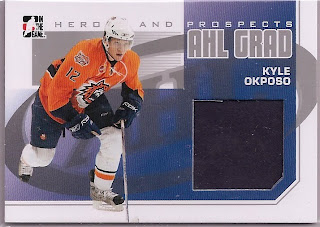 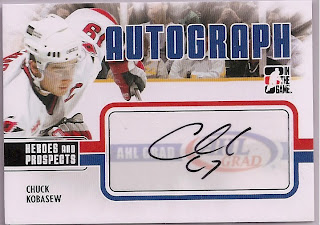 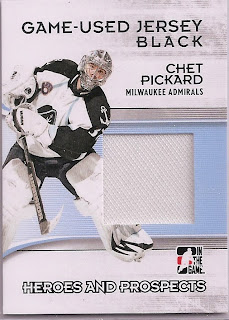 Overall it was a nice box. I am happy with pulling most of the set. I think I can get this one completed. The autos were nice and pulling a "Baby Pen" is sweet. Now I can't wait for Between The Pipes.
This Post Brought To You By TheRealDFG at 11:00 AM