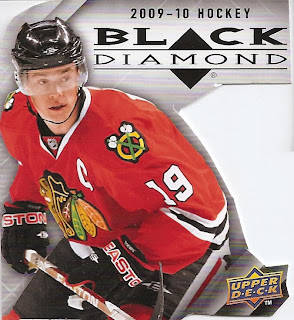 I know, I know. Don't bother to bring it up. I know what I did and I'm comfortable with it for now.

At any rate, here is a blaster of 2009-10 Black Diamond. I didn't have any of this product this year. I bought a hobby box last year and I was happy with it and what I pulled. This year, I watched another guy bust one at my local shop a few weeks ago. He did pretty good, actually pulling a nice Gemography and a decent Quad Jersey. There were a bunch of ruby parallels too. I know what you are thinking. That was hobby, this is retail. I'm not one to just jump into the pool without testing the waters first.

At any rate, here we go.

As you can see by the scans, the cards are a lot like last years. Lots of shiny foil to mezmerize and hypnotize. No big pulls in here as was expected from a blaster, but I did get a good idea of how this thing is collated. The DDs and TDs were 1:4 so that was expected. The QD, however, was 1:12 so that was a surprise. Plus it was a Messier which was not too shabby.

The Rookie Gem could have been better (Mike Sauer; a Rangers prospect) but hockey is becoming a lot like baseball in the prospecting category so who knows. Mr. Sauer plays for the Hartford Wolfpack in the AHL. He isn't a big goal scorer or a set up man. I'm not sure what roll he would play in New York. The sad thing is the only thing they could say about him on the back of the card is this:

So, not only can Upper Deck not spell, but the only thing nice they have to say is he has a brother and his NHL career has lasted for a half hour. Great job.

Overall, I like it. It is a solid set with a chance of pulling all the great rookies. The base set is under 100 cards and the inserts are a tough chase but well worth the effort.

(Welcome to forsbergroypronger33, the 19th follower. I'm going to guess by the avatar and name that he is also a huge Penguins fan. It's always nice to have a friend in the house.)
This Post Brought To You By TheRealDFG at 4:54 PM