No not that one. The other one.

Kurt Warner hung up the cleats, ending his 12 year NFL career. I think anyone who doesn't live under a rock and is a football fan knows the story of Kurt. For those rock dwellers...

Warner came out of the University of Northern Iowa, having only started his senior year. After being cut by Green Bay in training camp, who instead went with Brett Favre, Mark Brunell, and Ty Detmer, he was out of football. Relegated to stocking grocery shelves back in Iowa and helping with the UNI football program, he finally got another shot with the AFL. He played three seasons for the Iowa Barnstormers and led them to two Arena Bowls. He then was able to get another shot at the NFL by the Rams.

After playing in NFL Europe for the London Silly Nannies, I mean, Amsterdam Admirals (just seeing if you were paying attention) he ended up the third on the roster behind Tony Banks and Steve Bono. In 1999 he finally got his chance when both Banks and Bono were released and newly acquired Trent Green tore an ACL in preseason. We all know the rest...a Super Bowl victory and 2 other appearances.

He will most definitely be wearing a yellow jacket in Canton one day. You don't need anymore proof than this (cue obligatory stat lines):

--Reached 10,000 yards passing in less games than anyone in NFL history
--Tied with Dan Marino for the fastest to reach 30,000 yards passing.
--Has the top three passing performances in Super Bowl history. In fact, his 1,156 yards passing in the 2008 playoffs broke his own NFL record he set with St. Louis in 1999.
--2nd Highest Average Passing Yards Per Game, Career
--Highest completion percentage in a single game
--Most Yards Passing, Playoffs
--Tied with Joe Montana for the most touchdown passes in a single postseason
--Highest career playoff completion percentage
--2nd Highest career passer rating in the playoffs behind only Bart Starr
--Only NFL quarterback to throw 40 touchdowns and win a Super Bowl in the same season (1999).
--Only quarterback to throw for over 14,000 yards with two different teams (St. Louis Rams, Arizona Cardinals)
--One of only 2 players in NFL history to throw 100 touchdown passes with two different teams (Fran Tarkenton is the other)
--Only the second quarterback to make Super Bowl starts with two different teams joining Craig Morton (1970 Dallas Cowboys and 1977 Denver Broncos).

More than all the on field achievements though, Warner is a great humanitarian and ambassador for good will. I don't think you will ever find a guy that is more humble and grateful for all he has been given. And for that reason alone, he will be missed. A certain #4 can take a lesson from this.

Since this is a card blog, here are 10 of my favorite Warner's in no particular order... 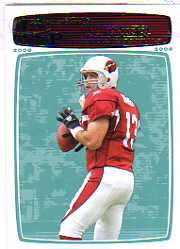 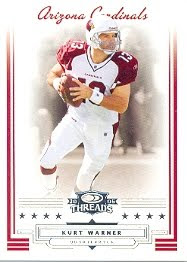 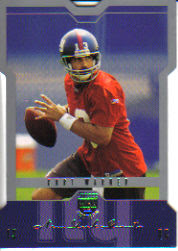 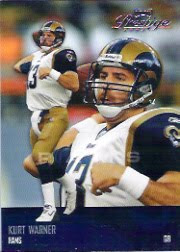 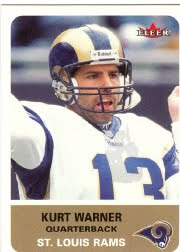 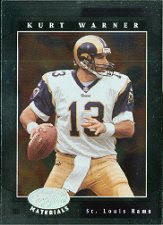 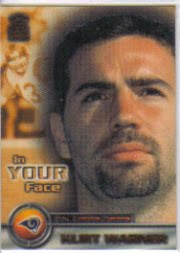 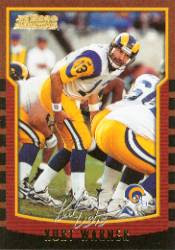 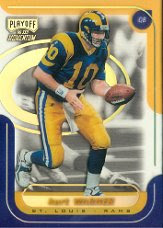 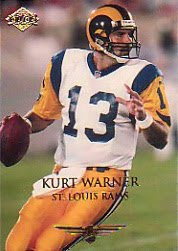 This Post Brought To You By dogfacedgremlin at 10:44 PM

Email ThisBlogThis!Share to TwitterShare to FacebookShare to Pinterest
Labels: going out on top, i hate brett favre, kurt warner retires