Yes that's right. In this case of the use of the term "Big", I am not referring to some hidden gem of a card that I have been looking for all my life. I am literally talking big as in size. I picked up two auctions from another collector that was getting out of the hobby. He was selling his football collection by the box load. Those new "if it fits...it ships" boxes from the USPS, to be exact. The two auctions that I won included over 3000 cards in each box. That's over 6000 cards for those of you not proficient in the ancient art of math.

Since the auction closed on Monday, imagine my surprise when, at lunch, my wife calls to inform me that there are two giant boxes that weigh at least 15 lbs each sitting on our dining room table. Usually the only thing in the mail are the bubble mailers which already annoy her to no end. Here's to sticking it to the man...er, woman.

After getting home tonight, I decided to bust them open to see what 6000 cards look like in a giant, unorganized, completely random pile. Here are the results. 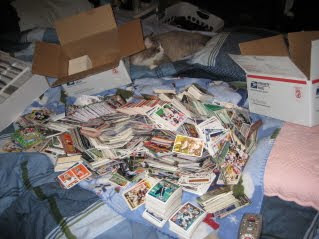 Yes, that's my cat back there, basking in the glory of a big pile o' cards. 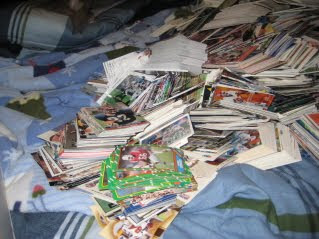 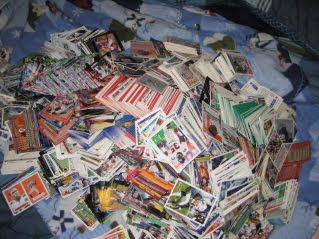 I bet there are even some complete (or at least mostly complete) sets in here. 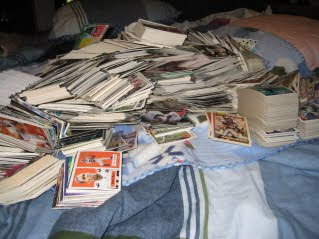 As you can see, I started to pile them nice and neat there on the right but quickly gave that up for a more conventional piling method of sorting.

So now I have my work cut out for me for a while. What to do with all these and where to put them? Plus, I haven't even begun to make a dent in the long, lost collection. I have started to log everything I have into my Zistle database. If you aren't familiar with Zistle, you need to be. It is a great alternative to most of the card organization programs out there. It is waaaayyyy better than the "new" Beckett server system.

Any football collectors out there with player or team wants, hit me up with your lists and I can see what I have in here.
This Post Brought To You By dogfacedgremlin at 10:27 PM