Stuff from the Bay

I think I wrote about this before but when it comes to eBay, I am mostly a lurker. I have been on there since February 2000 and only have a "51" user rating. It's not that I don't bid, because I do. I bid A LOT!!! I just never win. But that's another post entirely.
This one is about something I did win. In my quest to build my "one card of every Pittsburgh Steeler" collection, I stumbled across a couple golden oldies that I set my bidding sites on. Low and behold...I won!! These are definitely some beaut's, in my opinion. (especially since they set me back about @$2 each including shipping) Check em out. 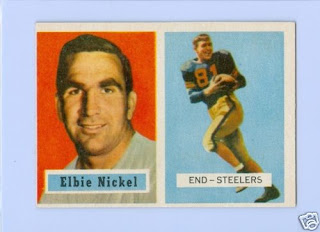 1957 Topps Elbie Nickel
Elbie played 11 years for the Steelers coming out of Cincinnatti and is considered one of the best Tight Ends in team history. One of his plays against the Eagles at Forbes Field is considered by many to be the second greatest play in Steeler's history (aside from the Immaculate Reception). The picture of it had hung in the Steeler offices in Three Rivers Stadium and is now in their UPMC facility on the South Side. He was voted to the 75th Anniversary Steelers All-Time Team. This was his last regular issue card. 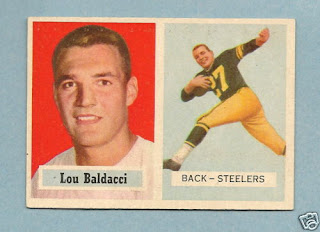 1957 Topps Lou Baldacci (R)
Lou was drafted by the Steelers out of Michigan in the 10th round in 1956. Lou only played one year for Pittsburgh and I think that was it for his NFL career. He was used as a punter, with his longest being a 64 yarder. He also had 140 yards rushing and 62 yards receiving that year. Ok so he isn't an impact player but the card is still freakin' cool. It's his rookie card, and for that matter, his only card (at least that I know of).

This Post Brought To You By dogfacedgremlin at 9:01 AM