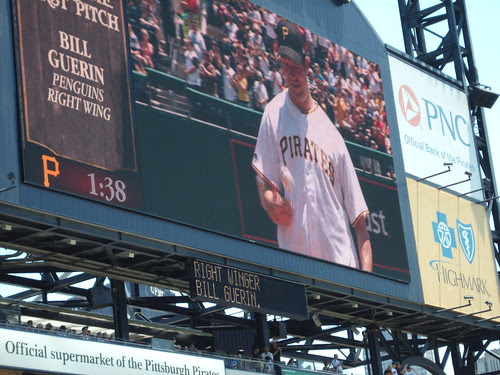 (Another example of my parodoxical view on things in Pittsburgh that are awesome mixed with things in Pittsburgh that suck.)
Adding insult to injury...pouring salt in the wound...aggravating the gods...fanning the flames...feeding the fire...pushing the buttons...rattling the cage, or whatever other cliche or idiom you wish to provide, the Wings beat the Pens in preseason hockey yesterday, too.
Besides the fact that the Pirates suck, that's two Pittsburgh losses in one day (eventhough one is preseason, it's still a loss). All of this said, it is safe to say that things are not going well in Pittsburgh as of late.
The Wings beat the Pens 4-1 yesterday while Crosby sat and watched. The only redeeming factor, at least in my mind, was when Guerin (my newest card collection facination) got a 10 minute misconduct penalty for sticking up for a teammate, after Franzen was shoving Letang. After the game, Guerin addressed the incident,

“Just things that happen during a game,” Guerin said. “Just sticking up
for a teammate. That’s the way it goes.”

Kunitz also got a roughing penalty as he and Guerin, according to all the article summaries of the game, "jumped" Franzen. I'm sure Detroit fans will have this posted as bulletin board fodder. What a load of crap! At least there is no sign of a loss of grit on the part of the Pens going into the season.
Bring on the Rangers!!

This Post Brought To You By dogfacedgremlin at 9:19 AM

Email ThisBlogThis!Share to TwitterShare to FacebookShare to Pinterest
Labels: bill guerin, i hate the wings, more depressing things out of pittsburgh, pirates suck, pittsburgh penguins, steelers are starting to suck