Today in Penguins history, the team set the NHL record for scoring the fastest five goals in a 10-4 win over the St. Louis Blues, and that record still holds to this day, with very few challengers. 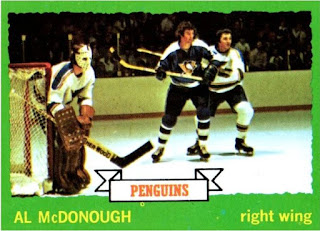 After having been beat in their previous meeting against the Blues, the Penguins put on a goal scoring clinic in front of the home crowd at the Civic Arena that night.  It was a back and forth game through most of the first and second periods.  A goal by Blues' Fran Huck early in the third put St. Louis up 4-3, triggering something special.


With goals by Al McDonough, Greg Polis, Bryan Hextall, Jean Pronovost, McDonough again for the hat trick, Ken Schinkel, and Ron Schock all within 2:07, the Penguins etched their names (most likely temporarily) in the history books.  The only teams to come close were the Bruins in 1974 with five in 2:55 and the Islanders in 1982 (strangely enough against the Penguins) with five in 2:37 seconds.
This Post Brought To You By dogfacedgremlin at 9:00 AM

Come Check Out The Puck Junk Booth At The Expo!!