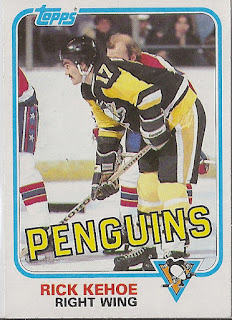 On this day in 1974, at the start of training camp, the Pittsburgh Penguins made what would become a huge deal with the Toronto Maple Leafs.  The Penguins acquired disgruntled Rick Kehoe in exchange for Blaine Stoughton and a 1st round draft pick in the 1977 NHL Amateur Draft, which became Trevor Johansen at the 12th pick.  Stoughton had been the Penguins 1st round pick in 1973 (as well as the 2nd round pick of the Nordiques in the WHA draft) and only played 34 games that season for the Pens.


On the Pens side of the deal, Rick Kehoe became a legend.  He would go on to play in parts of 11 seasons for the Pens, scoring at least 25 goals nine consecutive times.  Stemming from effects suffered by a neck injury against Quebec on February 13th, 1984, he retired as the team's all time leading scorer.  He put up 312 goals and added another 324 assists in his long stint in Pittsburgh.

Cementing his legendary Pittsburghian status, Kehoe went on to serve as Assistant Coach of the Pens for 14 seasons (under nine head coaches!!) and head coach for two more.  He was also head coach of the ill fated Roller Hockey International team, the Pittsburgh Phantoms and served as head coach for a moment in 2005-06 for the WBS Penguins in the AHL.  He is a charter member of the Penguins Hall of Fame Class of 1993 and was named to the All-Millennium Penguins Team in 2000.


This Post Brought To You By dogfacedgremlin at 5:30 PM