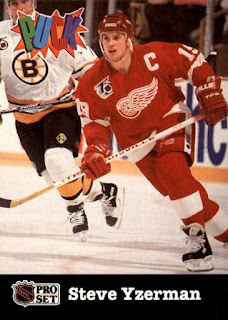 1991-92 was a year in hockey related cardboard that was right in the mix of what's known as the overproduction era (don't make me call it the "J" word).  Card manufacturers were producing sets left and right, trying to satiate the need of the glut of collectors that had flooded the market over the previous few years.  Pro Set was in the thick of it.


After having produced one of the most famous (infamous) hockey sets of the last 30 years in 1990-91, Pro Set came back with their sophomore hockey effort the following year.  Although much less error-ridden, the 1991-92 Pro Set hockey set would not be their only foray into the on-fire hockey card market.  They also offered up the newly resurrected Parkhurst brand in a two series release as well as the "super premium", and somewhat maligned, Pro Set Platinum card set.

But the venture they jumped into that I wanted to reflect on was not a full card release per se.  In fact, it wasn't even marketed as a card product.  I can't imagine what they were thinking at the time other than that they needed to capitalize on whatever outlets they could to make some cash for the fledgling company.  Plus, since Topps stopped putting gum in their products, the proverbial door was opened for someone to combine sports cards with something edible.  That's right.  I'm talking about 1991-92 Pro Set PUCK.


The Pro Set PUCK set consisted of 30 cards that were produced in conjunction with the company's new candy product. These were sold pretty much wherever you could find candy and cards, namely pharmacies and convenience stores (which is where I remember seeing them).  Each box had 24 individually wrapped packages.  The candy, like the name implied, was in fact a 2.2 ounce hockey puck made out of chocolate, caramel, peanuts, and vanilla nougat.  The cards were clearly an afterthought to the candy when it came to marketing, as the packaging boasts "Three Free NHL Cards Inside".  You weren't buying the cards.  Those were free.  You were buying the sugar.

The cards were wrapped in clear cellophane, inside the black foil package surrounding the choco-puck, in order to keep the candy from staining the cards, I would assume.  Doing the math here, it would take you putting at least 10 of these sweet biscuits in your basket, barring no doubles get pulled, in order to build a complete set.  At close to 300 calories each, that's a diabetic coma waiting to happen.  But it was the 90s.  Back then, no one had "the sugar" except your great aunt Margie, and she still had enough mobility to chase you down and leave her lipstick on your cheek.

The cards are not quite the same as the regular Pro Set cards.  On the front, the team logo has been replaced by the PUCK logo, exploding out of the cards. Each photo features one player from each team in some type of action shot on the ice.


The backs have a color head shot photo of the player and include all the particulars, like name, team, position, and birthday.  There is also a "Puck Note", which is information about the player as well as info related to things off the ice.  For instance, Wayne Gretzky raises thoroughbreds and is co-owner of the Toronto Argonauts.  Brian Bellows was working toward a business degree from St. Thomas College.  Or Patrick Roy...

At the time, Series I of the candy/card combo was released in all the US NHL markets and in the Northeastern area of the country.  To my knowledge, I don't think they were widely (or if at all) distributed in Canada as Pro Set tended to release a French version of their standard cards and there are no examples of French Puck cards.  Pro Set clearly planned on these being a hit, with future cards to be released later in the season.  However, additional Series never came to fruition.


You can find most of these fairly cheap as singles.  Many of them can be purchased for less than $1.00, if not less than $.50.  The only exceptions to this are the Wayne Gretzky card (which was once rumored to be short printed) and some of the prototypes that were sent to dealers prior to the release of the product.  The Great One generally get's closer to $5 or more.  As for the sets, try to snatch one up for under $15.  Chances are, you may even be able to get one under $10.  But in the rare case that you may be able to land a full box, please don't eat the chocolate bar.  If you do, be sure to film it.
This Post Brought To You By dogfacedgremlin at 6:00 PM